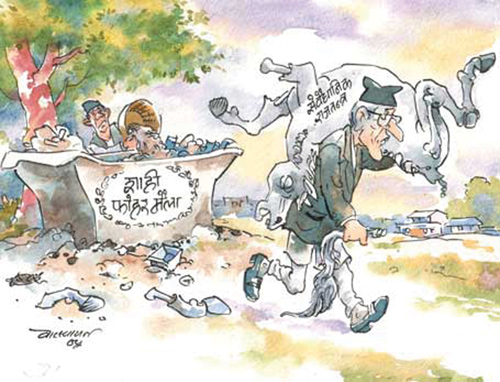 After King Gyanendra dissolved Parliament in 2002, pressure mounted on the Nepali Congress (NC) to renounce its long-held policy to support a constitutional monarchy. But the country’s largest party was hesitant, even as King Gyanendra hinted he was preparing for a coup. Cartoonist Batsyayan depicted NC President Girija Prasad Koirala carrying a carcass of a horse marked ‘Constitutional Monarchy’ on his shoulder (above).

The ‘flogging a dead horse’ sketch was controversial, with the royal palace putting pressure on Kantipur, the newspaper that Batsyayan works for, to apologise. Some pro-monarchy writers even demanded that Batsyayan be hanged.

Kantipur did apologise, but a controversy like this never fazed Batsyayan, arguably Nepal’s most influential cartoonist. He forced people to examine their own culture, society and politics. This week, Madan Puraskar Guthi honoured him with this year’s Jagadamba Shree Award for his life-long contribution to the enrichment of Nepali language through cartoon art.

Known in school as Durga Baral, he started out as a water colour painter. But when he began drawing political cartoons during the Panchayat era, he took on the pseudonym of Batsyayan to avoid detection. Baral returned home to Pokhara, and began making and selling paintings for tourists. It was Ramesh Nath Pandey who first inspired him to make cartoons for his weekly newspaper, Naya Sandesh. A sprightly 75-year-old, Batsyayan has a irreverant sense of humour comined with artistic skills.

The next big bad thing

Some questions are harder to answer than others
FOREIGN HAND

Improving water mills has a domino effect
MALLIKA ARYAL in KABHRE
Wow! It namely likewise fine treatise about JavaScript, babyliss pro curler I dissimilar Your post doesn't acquaint any sense. ray ban outlet uk if information are defined surrounded sketches one can effortlessly be versed with these. hollister sale I think a visualized exhibit can be better subsequently simply a effortless text, chanel espadrilles for sale that why it gives you improved quality. getnjloan.com Can you amuse forward me the code for this script alternatively interest distinguish me surrounded detail among relation apt this script? Vivienne Westwood online get a babyliss perfect curl Very soon this network sheet longing be outstanding among all blog viewers, isabel marant sneakers saleI too prefer Flash,