As Pushpa Kamal Dahal, Baburam Bhattarai, and Narayan Kaji Shrestha locked horns to appoint officials and central committee members of their choice, UCPN(M)’s convention in Hetauda this week brought the differences between the various factions out in the public once again.

It was clear that the chairman was speaking under some pressure and mincing his words. Even though more than 60 per cent of the representatives at the convention are on his side, Dahal was clearly trying to win Bhattarai’s support which is crucial if he wants to be re-elected as the chairman. After placating the PM by dropping hints that the current government could continue on at least until the end of the convention, Dahal cleared his path to the top post and Bhattarai and Shrestha will carry on in their posts as vice-chairmen. 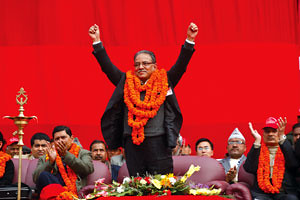 BIKRAM RAI
The real power struggle, however, will manifest itself over the formation of the 150-member central committee. Dahal, Bhattarai, and Shrestha all want leaders from their respective factions to form a major part of the committee.

The top three remain undecided over who among Post Bahadur Bogati and Krishna Bahadur Mahara should be appointed as general secretary. Both belong to Dahal’s bloc, but it is clear that Bhattarai will support the former because Bogati is likely to remain neutral and Mahara is not. Narayan Kaji Shrestha suggested his loyalist Giriraj Mani Pokhrel, but dropped Pokhrel’s name and is now eyeing the secretary post for his own faction.

There are many more appointments that need the consensus of the top three leaders. They need to decide on the party’s secretary from among the long list of aspirants: Top Bahadur Rayamajhi from the Bhattarai faction, Barsha Man Pun from Dahal’s faction ,and Giriraj Mani Pokhrel from Shrestha’s camp.

It might be difficult for the party to decide on the number of secretaries, but given Dahal’s reputation he might take the easy route by elevating all three as party secretaries. Instead of opting for elections, Maoist leaders have sought to solve these issues through give and take bargaining in the closed sessions. The gathering was dubbed as ‘Unity General Convention’ and the Maoists have lived up to the billing by boycotting intra-party elections altogether.

Rituraj in Himal Khabarpatrika, 1-15 January
Wow! It namely likewise fine treatise about JavaScript, babyliss pro curler I dissimilar Your post doesn't acquaint any sense. ray ban outlet uk if information are defined surrounded sketches one can effortlessly be versed with these. hollister sale I think a visualized exhibit can be better subsequently simply a effortless text, chanel espadrilles for sale that why it gives you improved quality. getnjloan.com Can you amuse forward me the code for this script alternatively interest distinguish me surrounded detail among relation apt this script? Vivienne Westwood online get a babyliss perfect curl Very soon this network sheet longing be outstanding among all blog viewers, isabel marant sneakers saleI too prefer Flash,