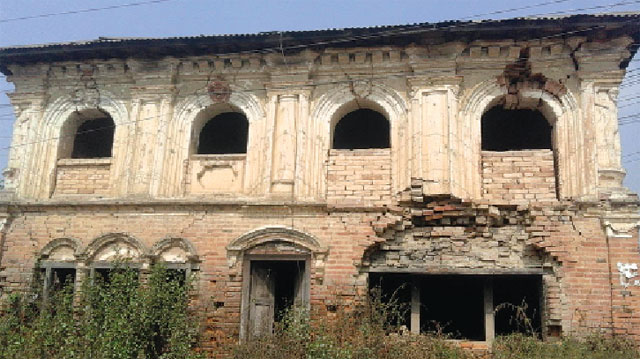 Min Bahadur Khadka, 85, remembers travelers walking to Kathmandu from the east spending the night in the small, white, lime and mortar rest house in Banepa. Porters would rest their loads, light a fire by the rest house and tuck in before they resumed their journey to Kathmandu the next day.

When the Arniko Highway was built in the 1960s, workers including Khadka lived in the house. During hot summer days, Khadka would cool off on the top floor. The rest house was forgotten as the highway replaced the foot trail. Today, the building is in a dilapidated condition, further damaged by the 2015 earthquake. The wood on the doors and windows have rotted, it is over-run with weeds inside and outside. But the roof, the stucco decorations and structure are still intact and if restored it could serve as a museum.

Built by a local businessman Hari Bhakta Bade and his brother Krishna Bhakta Bade 105 years ago, the two-storey rest house is called Setopati (white resting place). Some even call it Putalipati after the two female figures on the corners of the front facade.

“It provided shelter to a lot of people at the time. The beautiful and modern design made it the identity of Banepa,” says historian Gyan Kaji Manandhar.

Punyamaya Shrestha would go to the rest house to play hide-and-seek with her friends or take shelter from the rain in monsoon. Often she would meet new people who were taking a break from their journey.

Once the Arniko Highway was built and travelers stopped coming, it became a spot for drug addicts and  beggars. “Some were even found dead here, so the locals stopped coming,” says Shrestha.

It served as a polling station during the first Panchayat era elections as well as later ones, and for a time it housed the office of Red Cross.

The rest house is 8m by 5m and has half-a-dozen arched windows and there are figures depicting lions and birds on the outer wall. On the inside are wooden platforms for beds and also to store luggage and goods. On the left side of the rest house, there is a stone spout which is still functioning.

Banepa’s new mayor Laxmi Narayan Bade says the municipality is planning to preserve and restore heritage sites: “Development is our first priority but we will look into heritage conservation as well.”

A hiccup in the peace process

Please, can we have one?
ARTHA BEED
Wow! It namely likewise fine treatise about JavaScript, babyliss pro curler I dissimilar Your post doesn't acquaint any sense. ray ban outlet uk if information are defined surrounded sketches one can effortlessly be versed with these. hollister sale I think a visualized exhibit can be better subsequently simply a effortless text, chanel espadrilles for sale that why it gives you improved quality. getnjloan.com Can you amuse forward me the code for this script alternatively interest distinguish me surrounded detail among relation apt this script? Vivienne Westwood online get a babyliss perfect curl Very soon this network sheet longing be outstanding among all blog viewers, isabel marant sneakers saleI too prefer Flash,