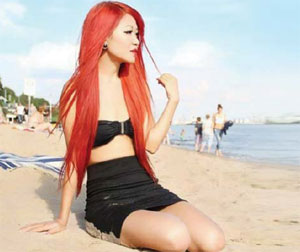 In the YouTube video ‘Sir & Student’ that got over 350,000 views, we can see Yeshi Dolma Lama playing various characters—from a teacher with a fake moustache to a studious teacher’s pet and a journalist among others. In 2011, when Lama aka Yeshigaga on YouTube uploaded her first video, she could not imagine that her channel would have over 22,000 subscribers.

“I know a lot of people watch my videos, but I don’t know who they are or even why they watch them,” says Lama. Her own mother had a hard time believing that Lama was on YouTube.

Daughter of famous comedian Dolma Hyolmo, she credits her mother as her inspiration. “She was so funny on screen. In the past I laughed watching my mother on screen, today she laughs watching me,” says Lama.

At one point Lama lost her drive to be an actor due to the stress her mother had as a comedian. But that did not last long, as Lama’s aspirations came back after watching videos of YouTube celebrity Nigahiga, an American YouTube actor of Japanese descent with two billion views for his videos.

“I wanted to do something with my friends but most of them were too shy. So I ventured out on my own,” says Lama whose channel includes beauty tutorials, fashion tutorials, and vlogs but it is her parody videos like ‘Kya Beijjat’ (How embarrassing) and ‘Dad ko rajniti’ (Dad’s politics) that have made her one of the better known Nepali YouTube celebrities.

Lama said it is not an easy job to put oneself out there and not gain a few ‘haters’ in addition to the faithful fans. Another difficult issue is making Nepali videos in Germany, where Lama is based, because she cannot easily find what she needs. Once Lama needed a dhaka topi and had to order it online from Nepal.

This multitalented individual is a quadruple threat: as she not only acts in and edits her videos but also writes the scripts, and is a popular blogger.

Lama says her heart lies in making videos that make people laugh, she is aware that they are a form of escapism for many Nepali migrant workers toiling around the world.

Why every disaster becomes a money spinner
ARTHA BEED
Wow! It namely likewise fine treatise about JavaScript, babyliss pro curler I dissimilar Your post doesn't acquaint any sense. ray ban outlet uk if information are defined surrounded sketches one can effortlessly be versed with these. hollister sale I think a visualized exhibit can be better subsequently simply a effortless text, chanel espadrilles for sale that why it gives you improved quality. getnjloan.com Can you amuse forward me the code for this script alternatively interest distinguish me surrounded detail among relation apt this script? Vivienne Westwood online get a babyliss perfect curl Very soon this network sheet longing be outstanding among all blog viewers, isabel marant sneakers saleI too prefer Flash,