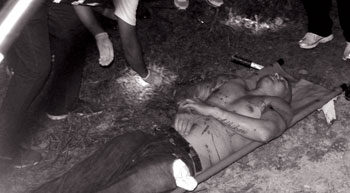 DEVAKI BISTA
FAILED GETAWAY: The body of Dinesh Adhikari has not been claimed by his relatives 17 days after he was killed in an encounter with the police.
When I visited Charkhal Jail in 2008 for an investigative story on organised crime, I saw a group of young, attractive women enter the prison. They swayed over to the corner where a good-looking inmate was sitting. Like fan girls swooning around a favourite rock star, the young women seemed to be in complete awe of the man.

He was Dinesh Adhikari, already gaining notoriety for being the local boss of organised criminals, and known to law enforcement officials and politicians as ‘Chari’ (bird). Even in jail six years ago, you could see he commanded a certain following, if not respect, even though he didn’t yet look like a gangster.

Last week, Chari was killed in a movie-style police encounter in Samakhusi, an incident which prompted the UML Chairman KP Oli to criticise his own government. Chari is said to have the protection of politicians, including Oli. The news spread like wildfire in the media because it had all the ingredients of a thriller: crime, blood and politics. The public may have been relieved that a criminal was killed, but Chari’s end does not mean an end to the criminalisation of politics and the politicisation of crime. 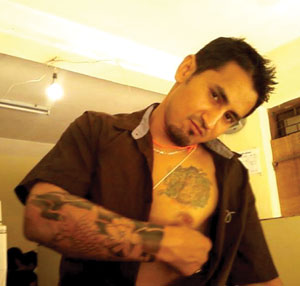 Society is organised around political parties, or special interest groups. These can be based on identity, protection, even power. In countries in the throes of political transition, where law and order and the institutions of democracy are not fully functional, organised criminals wield parallel power – often in a symbiotic relationship with politicians.

Kathmandu’s infamous gangster bosses emerged after 2006, benefiting from the instability, political patronage and attraction of money and power. Many of the gangs were closely knit along community lines, hence their names: Manange and Kavreli gangs.

Lack of political representation and opportunities also pushes socially and politically groups excluded into gangs for power, prestige and income. Most have a history of struggle within their families, others have been victimised by the state and have a rebellious streak towards rulers and the security apparatus.

Add to that the country’s youth bulge, lack of jobs, and peer pressure and it is very easy for these individuals to be lured into a world of crime. Politicians who need hired goons and a corrupt police hierarchy provide gangs a further reason for being.

Politicians protect goons and turn them into dangerous criminals, jails are supposed to be correctional institutions but it is here that they establish loyalties for violent gangs when they get out. The police has a role in removing organised crime, but it can’t be stopped unless the state addresses its structural roots and the nexus with politics.

It may not be possible to have a society that is completely crime-free, but a country where crime is so embedded can never prosper. The ideology of violence that propels gangs also undermines the democratic process, where muscle matters more than minds.

We have seen elsewhere that criminal groups grow in number and influence whenever a gangster is killed encounter-style. It proves that our steps to manage crime are inherently flawed. Maybe it is time to consider alternatives and reach out to marginalised communities where crime is a form of protest against the status quo.
People like Chari and his band of followers are symptoms of our societal malaise. It is wishful thinking to say that killing one Chari will prevent another from taking his place.

Dipesh KC is working on a doctorate on cross-border crime at the Jawaharlal Nehru University in New Delhi.

Kathmandu’s other infamous gangsters are either in jail or protected by politicians.