Say no to monarchy 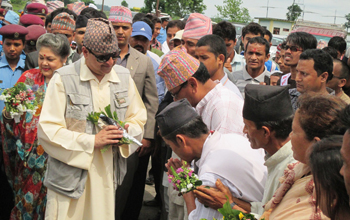 BACHCHU BK
Lately, former-king Gyanendra Shah has become more active and visible in politics. As a civilian, he is free to participate in politics or assist flood victims in western Nepal. But what is more troublesome than the ex-king’s political ambitions, is the dubious behaviour of leaders of various political parties who are cosying up to Shah.

Shashank Koirala, a central member of the NC, recently voiced his support for the monarchy and although this opinion is not shared by his party, Koirala’s statement is still worrisome. Similarly, leaders of CPN-M Mohan Baidya and Netra Bikram Chand, who have been extremely vocal in their opposition to polls, said they too are open to the idea of collaborating with the ex-king for the sake of national sovereignty. What do these latest developments say about the credentials of the NC and Maoists, who once played such a crucial role in ushering democracy in the country? And what will it do to the revolutionary image of the Maoists when leaders like Baidya begin looking wishfully towards the former monarch as an alternative?

Although it is true that Nepal is now running under covert control of international forces, bringing Shah back into the political fray is not the solution. Such a move will only strengthen the right-wing establishment and devalue the achievements and ideals of the 2006 Jana Andolan like federalism and secularism.

For the past eight years, political parties have continued to make and repeat mistakes. Not writing the constitution and failing to institutionalise democracy will be seen as their biggest failures. But this doesn’t mean that the political transformations of the past decade or the people’s movement were mistakes. The only alternative to a republic is a stronger republic.

The threat to Nepal’s nationalism comes from external forces gaining power due to poor governance and indecisiveness of our leaders. The solution lies in working towards building a conducive environment for free and fair elections. It is important that political parties overcome their veil of ignorance and learn a few lessons from the past. The sooner they do this, the sooner the country can move ahead.

A courtyard to the Buddha’s memory

No record of Buddhas visit to the Valley exists other than hearsay attached to hallowed spots. Like a small courtyard in Patan.
DESMOND DOIG

A group of international artists is using Nepali material for a traveling exhibition called Made in Nepal: 2001.
WAYNE AMTZIS

A new collection of historical and ethnographic essays focuses on Nepals western hills-an area long neglected by scholars.
SUDHINDRA SHARMA
Wow! It namely likewise fine treatise about JavaScript, babyliss pro curler I dissimilar Your post doesn't acquaint any sense. ray ban outlet uk if information are defined surrounded sketches one can effortlessly be versed with these. hollister sale I think a visualized exhibit can be better subsequently simply a effortless text, chanel espadrilles for sale that why it gives you improved quality. getnjloan.com Can you amuse forward me the code for this script alternatively interest distinguish me surrounded detail among relation apt this script? Vivienne Westwood online get a babyliss perfect curl Very soon this network sheet longing be outstanding among all blog viewers, isabel marant sneakers saleI too prefer Flash,