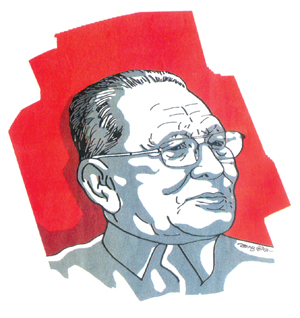 BASU KSHITIJ/ANNAPURNA
It’s 1949. Nepal is still under the grip of the autocratic Rana regime. People are not allowed to write, talk, or speak in public. Organised politics is out of the question. Elsewhere in the world communism is beginning to take hold.

In China, military and political leader Chiang Kai-shek is about to abscond. Soviet Union is ruled by Stalin. Papers published in Prague, Czechoslovakia are broadcasting communist instructions and philosophies around the globe. Farmers in Telangana (present day Andhra Pradesh) have seized hundreds of acres of lands and are distributing them to the poor. Over in West Bengal, the Indian Communist Party is organising massive rallies chanting, “We have to follow the Chinese, follow the Chinese.”

Inspired by these events and wanting to start a people’s revolution in their own homeland, four young Nepali men - Nara Bahadur Karmacharya, Pushpa Lal Shrestha, Niranjan Govind Baidya, and Narayan Bilas Joshi – establish the Communist Party of Nepal in Kolkata on 22 April, which is also Lenin’s birth date. The party’s main goal is to depose the Rana rulers and start a people’s revolution because the leaders believe simply following Gandhi’s principle of non-violence is not going to be enough.

In the six decades since then, the country has undergone immense transformation from a cloistered Hindu Kingdom to a progressive secular republic and Karmacharya, Shrestha, Baidya, and Joshi were major catalysts for these changes. On Wednesday, Karmacharya, the last of the founding fathers, passed away at the age of 90, with his lifelong dream of a people’s revolution unfulfilled. Those who didn’t bother to check up on him while he was bedridden in hospital, turned up at Paris Danda and Khula Manch to pay their last respect and shed crocodile tears.

Karmacharya was inspired to join politics after he witnessed the execution of martyrs Shukraraj Shastri, Gangalal Shrestha, Dharma Bhakta Mathema, and Dashrath Chand in 1941 for revolting against the Ranas. He was just 16 at that time. “After seeing the martyrs being hanged, I realised that the Rana rule had to be abolished and that’s why I entered politics,” Karmarchayra would say.

He started out with Surya Bahadur Bharadwaj’s Democracy Association (‘Prajatantra Sangh’). Pushpa Lal was also a part of this group. The members called themselves communists and read revolutionary books from India like Messages of Communism (‘Samyabad ko sandesh’). After being caught multiple times and tortured for protesting against the Ranas, Karmacharya left for Kolkata along with a friend in the mid-1940’s.

Before starting their own communist party, the four men took a week long training from leaders of the Bengali Communist Party. Karmacharya was also deeply influenced by the teachings of Bengali leader Nripendra Chakraborty whom he credits for inculcating in him communist ideologies, principles, and conduct.

Today the original party has split and divided variously with over a dozen communist parties each calling itself ‘24 carat’ authentic. When asked about his thoughts on the replication of parties, Karmacharya would generally respond, “Most parties are only ‘communist’ in name. You cannot be a true communist party without your own army.”

The veteran politician believed that revisionism within the party began in 1956 when Tanka Prasad Acharya and friends started the Jatiya Janatantrik Sanyukta Morcha. But he was most disheartened by the spilt during the fourth party convention in 1983 and the breakup of the unity centre in 1994 due to disagreements over whether to participate in the ‘People’s War’ or not. Karmacharya decided not to be a part of the armed conflict.

Before he took the plunge into politics, Karmacharya used to be a champion basketball player and also a trained singer. “When I joined politics, my only goal was to bring down the Rana regime. So I gave up all my hobbies. From when I was 17 or 18, politics became my dream and my work,” he said. He even sacrificed his family life and remained unmarried so that he could devote his 100 per cent to the party.

Nara Bahadur Karmacharya created Nepal’s first communist party, which despite its internal fragmentation is at the forefront of the country’s politics today. With his death, Nepal’s leftist establishment has lost an honest and upright leader.

The paradox of the present stalemate is that the government and Maoists are both under pressure to talk, but neither side really gains from talking.
CK LAL

CPN (Maoist) Kathmandu commander, Rabindra Shrestha, in Kantipur, 5 November
Wow! It namely likewise fine treatise about JavaScript, babyliss pro curler I dissimilar Your post doesn't acquaint any sense. ray ban outlet uk if information are defined surrounded sketches one can effortlessly be versed with these. hollister sale I think a visualized exhibit can be better subsequently simply a effortless text, chanel espadrilles for sale that why it gives you improved quality. getnjloan.com Can you amuse forward me the code for this script alternatively interest distinguish me surrounded detail among relation apt this script? Vivienne Westwood online get a babyliss perfect curl Very soon this network sheet longing be outstanding among all blog viewers, isabel marant sneakers saleI too prefer Flash,