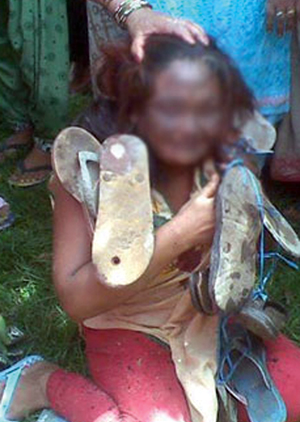 I was returning home that evening when a man grabbed me from the back. Before I could scream for help, he pushed me to the ground and covered my mouth. It was already dark so I couldn’t recognise the attacker, but judging by his voice, I presumed it was Jiwan from my village. He had me in a chokehold and began forcing himself on me. When I bit his hand and screamed for help he threatened to kill me and strangled me again.

It was only when people from nearby houses came out with torch lights that the assailant ran away. I went to the police and told them I had been attacked by Jiwan and could identify him by the bite marks on his hand. But when Jiwan was brought to the station, I saw no signs of injury on his hands. I thought I had wrongly accused him. On my way home, Jiwan’s mother slapped me and said that since I was a Dalit, I wouldn’t be able to do anything and I would pay for my actions.

A village meeting was called on Monday morning to sort things out. But since the meeting didn’t begin until 8, I left for work. Later when I was called back everyone started hurling abuses at me and asked who had instigated me report to the police. When I said I did it out of my own will, the mob suddenly started punching and slapping me. They tore my clothes, covered my face in soot, and made me wear a shoe garland.

I even apologised to Jiwan and said I wouldn’t repeat what I did. But the mob just didn’t stop.

Listen to the audio clip

KV Rajan, former Indian ambassador to Nepal in Nepal, 9 January
Wow! It namely likewise fine treatise about JavaScript, babyliss pro curler I dissimilar Your post doesn't acquaint any sense. ray ban outlet uk if information are defined surrounded sketches one can effortlessly be versed with these. hollister sale I think a visualized exhibit can be better subsequently simply a effortless text, chanel espadrilles for sale that why it gives you improved quality. getnjloan.com Can you amuse forward me the code for this script alternatively interest distinguish me surrounded detail among relation apt this script? Vivienne Westwood online get a babyliss perfect curl Very soon this network sheet longing be outstanding among all blog viewers, isabel marant sneakers saleI too prefer Flash,