“Abolishing the monarchy was a mistake” 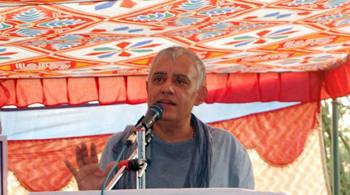 BBC: Whose philosophy – BP Koirala or GP Koirala – is more pertinent in the current political scenario?

Shashank Koirala: I still stand by BP Koirala’s beliefs. He agreed with the king as far as nationalism was concerned, but held a very different view on democracy. Nepal abolished the 240-year-old monarchy in 2008, but look at the state of the country in the past 10 years. We had a chance to set things right before the 2006 uprising by bringing the Maoists to table. If Girija Prasad Koirala had taken a firm step, Nepal would have been in a better position. If we don’t mend our ways soon, it is going to be very unfortunate.

How can we put the country back on track?

BP always spoke about nationalism and nation building, but nobody seems to be bothered about these values any more. He used say that the king would protect Nepal’s nationalism because it is in his interests. But now people only talk about dividing the country along ethnic lines. If CA elections don’t take place in November, it will push the country further into anarchy. Our biggest priorities should be nation building and writing the constitution.

Do you mean Nepal should follow BP’s blueprint to correct past mistakes?

We certainly need to correct our mistakes, but that doesn’t necessarily mean reinstating the monarchy. It’s for the people to decide whether or not they want to revive the monarchy. If 30 million Nepalis say they want the king, monarchy will return. Also of late the NC’s image has been sinking, we need to restore our standing in the public.

After the 2006 uprising, the NC fully backed the Maoists and followed its agenda. What is the party’s position now on issues of federalism, secularism, and republicanism?

The NC believes in multi-party democracy and an independent judiciary. People shuold be free to chose their religion and must not be forced to convert through enticement. As far as federalism is concerned BP always supported decentralisation with the ultimate aim of creating a federal state. But federalism is not a magic wand that will solve all of Nepal’s problems.

However, abolishing the monarchy and becoming a republic were big mistakes. In 2006 when people came out on the streets to protest, there was not a single leader of BP’s stature who could bring the situation under control. Views on secularism and federalism were shared by most parties, but declaring the country a republic was solely a Maoist agenda. The idea of abolishing the monarchy came out from the Maoist camp.

You don’t agree with the NC’s current policies, what are your recommendations?

We need to first focus on preventing Nepal from breaking apart. The parties need to agree on holding CA elections as soon as possible to give people a constitution within the next two to four years. Local elections also need to take place. Like BP said we need to think of the country first.

Listen to the full interview

The Tharu struggle to survive war, impunity and neglect
NARESH NEWAR in BARDIYA

Signing the Human Rights Accord would be good PR for the government
KUNDA DIXIT
Wow! It namely likewise fine treatise about JavaScript, babyliss pro curler I dissimilar Your post doesn't acquaint any sense. ray ban outlet uk if information are defined surrounded sketches one can effortlessly be versed with these. hollister sale I think a visualized exhibit can be better subsequently simply a effortless text, chanel espadrilles for sale that why it gives you improved quality. getnjloan.com Can you amuse forward me the code for this script alternatively interest distinguish me surrounded detail among relation apt this script? Vivienne Westwood online get a babyliss perfect curl Very soon this network sheet longing be outstanding among all blog viewers, isabel marant sneakers saleI too prefer Flash,