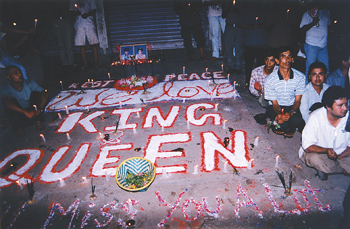 I was in Seoul with a friend when I read online about the royal family massacre. We left the conference and flew back to Nepal immediately. Since there was a curfew in town, the police drove us from the airport to Kantipur’s headquarter in Tinkune. The entire nation was in shock and denial. Nepalis just couldn’t bring themselves to accept that they had lost their beloved King Birendra and his family. And they were neither in the mood to accept Crown Prince Dipendra as the murderer.

At work, I found that Baburam Bhattarai’s column, in which he blamed India and the US for planning the massacre and accused then PM Girija Koirala and to-be-crowned King Gyanendra of helping them, was going to press. We decided to print the piece, but were soon put in police custody for ‘treachery’.

In the wake of the palace massacre, everyone was consumed with Gorakhnath’s prophecy that Prithvi Narayan Shah’s dynasty would not rule beyond 10 generations. As I spent the night in police custody at my office, I privately hoped that the government, political parties, and everyone else would come together in this time of grave crisis. It never happened.

The state proved completely inept at providing relief to a nation in mourning. PM Koirala didn’t even bother calling a parliament meeting or informing the public that he was going to set up an investigation panel. The latter was of more importance, but Koirala and opposition leader Madhav Kumar Nepal backed out and urged the palace to conduct its own investigations. When the palace secretariat finally spoke out, its explanations were wholly unsatisfactory.

There was an enormous information vaccum and the public found itself swarmed with endless rumours. No one had even heard about the serious injuries that Gyanendra’s wife Komal had sustained.

In cases like these, the blame is usually put on those who happen to benefit from the event the most. Ever since that dreadful night, Gyanendra had to deal with insulting and unfounded accusations with silence. And due to his notoriety, his son Paras – who had used his presence of mind to save many family members – became the prime suspect.

When I met the new king three months later for the first time, I told him how the faulty investigations had left Nepalis searching for the truth. Since the CJ-led team had already submitted its report, it was too late to form another investigation panel. So it wasn’t hard to understand the miseries of a king who couldn’t show any signs of weakness despite losing his entire family on his way to the throne.

When the Constituent Assembly decided to abolish the monarchy in Nepal, Gyanendra challenged those in power by telling them that he would cooperate with any investigation into the massacre. Nobody accepted his challenge. Instead all the leaders like Pushpa Kamal Dahal continued accusing him.

The palace always kept Dipendra’s outrageous behaviours under wraps and it seems no one really bothered to educate or groom the future king. He was given free rein and his problems went unchecked. Since Paras was the more notorious of the young royals, Dipendra’s antics went largely unnoticed.

The prince’s fiery temper and obstinate nature were no secret among close friends. Dipendra once half-buried a lover to scare her. Another time he locked a girl in the bonnet of his car as he drove around town. “We never thought these behaviours would eventually lead to him killing his entire family,” says one of his friends on the condition of anonymity.

Twelve years on, there are still no clear answers about what actually happened on the night of 1 June, the debate lingers on. We can attribute much of the confusion to the lethargy that has come to characterise this country’s politics and administration. When filmmakers and historians try to reconstruct this tragic event in the future, the validity of their stories will depend on humanitarian instincts or its lack thereof.

Dipendra kicked his father after he shot him

The World Cup is seen as a unique opportunity not only to thrust South Africa into global prominence, but also to honour the entire African continent
SURESH NEUPANE

Blow your own trumpet

The world has made giant strides since 2006, how about us?
INDU NEPAL

The mixed record of poverty reduction calls into question the efficacy of conventional approaches
JOMO KWAME SUNDARAM
Wow! It namely likewise fine treatise about JavaScript, babyliss pro curler I dissimilar Your post doesn't acquaint any sense. ray ban outlet uk if information are defined surrounded sketches one can effortlessly be versed with these. hollister sale I think a visualized exhibit can be better subsequently simply a effortless text, chanel espadrilles for sale that why it gives you improved quality. getnjloan.com Can you amuse forward me the code for this script alternatively interest distinguish me surrounded detail among relation apt this script? Vivienne Westwood online get a babyliss perfect curl Very soon this network sheet longing be outstanding among all blog viewers, isabel marant sneakers saleI too prefer Flash,