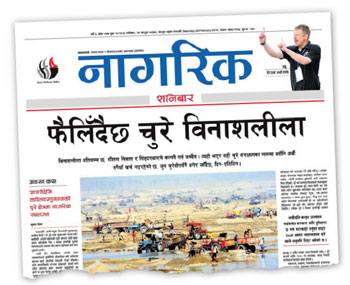 The Himalayan mountains have four layers: the Tibetan rimland, the high Himalaya, the midhills, and the Chure. These first wrinkles that rise from the Tarai plains stretch right across Nepal covering 12.6 per cent of the country’s land area. It is a treasure trove of biodiversity, but these hills are fragile because they are made up of sand, boulders, and a thin layer of top soil.

Which is why the vegetation cover of the slopes is essential to prevent soil erosion and floods downstream. But the Chure is now in the grip of the sand and boulder exporting mafia who has ravaged the hills. A recent investigation showed 193 crusher units operating from Saptari to Kapilvastu, with excavators and tractors gouging out the Chure slopes.

The rapid destruction in Chure is driven largely by the growing demand for building materials to feed the construction of highways, irrigation canals, and cities across the border in northern India. Nepali companies supplied sand, stones for construction of the recently completed 1,650km expressway from New Delhi to Guwahati. The demand is likely to rise after the proposed 650km Indo-Nepal border road gets underway.

“The mining of stone and gravel is 50 times more than the national demand,” says Santosh Mani Nepal, who has been studying the mining trends in Chure area. “If it continues at this rate, the Chure will be gone.” It is estimated that Nepal exported almost 8.7 million cubic metres of sand, stone, and gravel between 2009 and 2010.

This over-exploitation and denudation can have devastating impacts on the groundwater supply and unleash flashfloods and mudslides downstream in the Tarai and India. The soft and fragile hills have been known to dissolve in just a single monsoon season. President Ram Baran Yadav has made saving the Chure one of his priority projects of national pride, but like earlier programs it hasn’t delivered much.

The environmental impact of sand and stone mining in the Chure is devastating. The slopes have huge gashes in them and the roads have been wrecked by tipper trucks carrying twice the legal weight of gravel.

The state’s security forces deployed in the area allow the mining mafia unfettered access. The mafia controls local opposition with threats and intimidation. Local forest officers say they are helpless because the CDOs choose not take any action on the operators even though the operators have flouted more than a dozen environmental regulations.

The mafia has such a stronghold on the local administration to the power corridors of Singha Darbar and Shital Niwas that no one has dared to question their activities. Instead of curbing the indiscriminate mining, the government has given the operators licence to operate till mid 2014.

The season of war

In Christiandom, disgust for Saddam Hussein is mixed with great skepticism about the utility and morality of this coming war.
DANIEL LAK

The quality of nominees for this years Hits FM Music Awards shows that Nepali music has come of age.

With a week-old ceasefire, some thoughts from the hinterland where so few Kathmandu folk dare to tread.
DANIEL LAK

In gold we trust

In times of economic uncertainty, the world has always turned to gold.
ARTHA BEED
Wow! It namely likewise fine treatise about JavaScript, babyliss pro curler I dissimilar Your post doesn't acquaint any sense. ray ban outlet uk if information are defined surrounded sketches one can effortlessly be versed with these. hollister sale I think a visualized exhibit can be better subsequently simply a effortless text, chanel espadrilles for sale that why it gives you improved quality. getnjloan.com Can you amuse forward me the code for this script alternatively interest distinguish me surrounded detail among relation apt this script? Vivienne Westwood online get a babyliss perfect curl Very soon this network sheet longing be outstanding among all blog viewers, isabel marant sneakers saleI too prefer Flash,