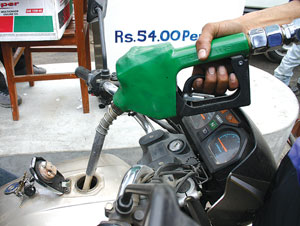 As oil prices continue to fall in the international market, Nepal’s economy is beginning to show signs of improvement.

nflation has remained stable and economic growth rate has also been positive. The drop in oil price drop could also offset loss caused by low rice and corn production this year.

“We are yet to determine how much agriculture losses will be compensated by oil prices,” says Min Bahadur Shrestha, of Nepal Rastra Bank (NRB).

In September, the government adopted an automatic pricing mechanism for regular revision of fuel prices. Since its introduction, petrol and diesel prices have been revised eight times. Petrol and diesel/kerosene prices dropped by 20.36 % and 19.27% respectively in the last year alone. The oil price fall has had a positive effect mainly in agriculture, service and industry sectors. “Apart from stabilising inflation rate, it has also increased BoP (Balance of Payment) surplus,” says Shrestha.

Nepal Oil Corporation (NOC) has been making profits ever since oil prices began to drop in the international market. But, the NOC says it will take at least three years to clear its past loans.

“Even if the loan that we took from the government is converted into capital, we will take at least three years to repay all other loans,” says NOC’s executive director Chandika Bhatta. But, if oil prices begin to rise, Bhatta says the repayment period will increase dramatically.

Until the NOC clears its loan, customers will continue to pay more for all petroleum products except for LPG gas. Customers are paying Rs 14.42 more for every litre of petrol at present. With worsening power outages, Nepal has been increasing its volume of imported fuel every year. Last year, Nepal spent Rs 1.3 billion in import of petroleum products from India.

A study has shown that up to 500 MW of electricity comes from captive diesel generators which raises cost by 25%. The drop in diesel price has reduced cost of electricity generation through generators. However, there has been no effect on transportation cost.

“Money that would otherwise have been spent in fuel import can now be used in development work,” says economist Keshav Acharya.

One week in Rolpa

The people of Rolpa desperately need help. Not to fight the Maoists, but to give the Maoists nothing to fight about
KASHISH DAS SHRESTHA in GHARTIGAUN

Himal Khabarpatrika, 17-31 July
Wow! It namely likewise fine treatise about JavaScript, babyliss pro curler I dissimilar Your post doesn't acquaint any sense. ray ban outlet uk if information are defined surrounded sketches one can effortlessly be versed with these. hollister sale I think a visualized exhibit can be better subsequently simply a effortless text, chanel espadrilles for sale that why it gives you improved quality. getnjloan.com Can you amuse forward me the code for this script alternatively interest distinguish me surrounded detail among relation apt this script? Vivienne Westwood online get a babyliss perfect curl Very soon this network sheet longing be outstanding among all blog viewers, isabel marant sneakers saleI too prefer Flash,