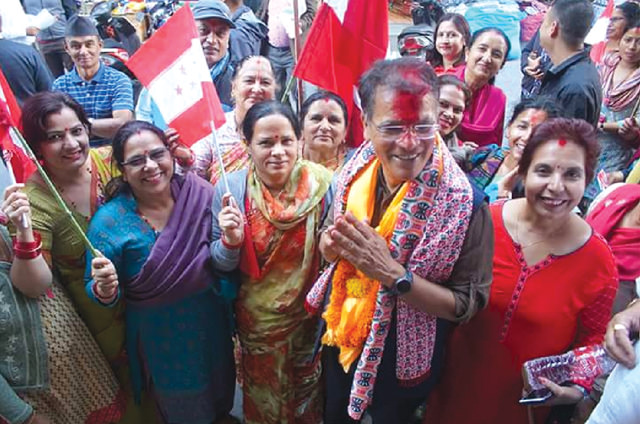 The first parliamentary and provincial elections under the new Constitution, on 26 November and 7 December, could produce upset victories that could possibly reshape national politics.

Almost all top leaders of major parties have entered the electoral fray, but their wins are not guaranteed, and their shock defeats could make or break new alliances. Prime Minister and Nepali Congress President Sher Bahadur Deuba has won all five parliamentary elections since 1991, but his victory is not certain this time. If the results of the last local elections are any indicator, the NC is behind the UML-Maoist coalition by at least 8,000 votes in Deuba’s Dadeldhura constituency.

To make matters worse for Deuba, there is a feud between NC Dadeldhura committee President Karna Malla and ex-President Raghubir Bhatta. The Malla group even organised a rally against Deuba ahead of local polls. Observers say the rift and the left alliance could be bad news for Deuba. And if he bites the dust, his arch-rival within the NC, Ram Chandra Poudel, could consolidate his grip over the party. But even Poudel’s fate in his native Tanahun is far from certain because of the mutiny of his party colleague Govinda Raj Joshi. Although the Election Commission nullified Joshi’s candidacy because of his involvement in a corruption case, he is spearheading a campaign to defeat Poudel.

CPN (Maoist-Centre) Chair Pushpa Kamal Dahal is much stronger than his rival Bikram Pandey of the RPP in Chitwan 3, especially after forging an alliance with the UML. But the animosity between the local cadres of the UML and the Maoist, caused by the Bharatpur fracas during local elections, has not yet healed. Thousands of UML supporters are unlikely to vote for Dahal.

If Dahal suffers a shock defeat in Chitwan, he might reconsider his party’s alliance with the UML. With the NC still trying to charm him out of the UML’s embrace, the possibility of a renewed partnership between Deuba and Dahal cannot be ruled out just yet.

Unlike Deuba, Poudel and Dahal, UML Chair KP Oli’s win is certain. The UML has a strong organisational base in Oli’s Jhapa 5 constituency, which has been further consolidated by Maoist support. And Oli’s opponent, the NC’s Khagendra Adhikari, is not a well-known face.

Top Madhesi leaders like Upendra Yadav, Mahanta Thakur and Rajendra Mahato are also facing tough tests. Yadav is pitted against former Irrigation Minister Umesh Yadav of the Maoist-UML alliance in Saptari 2. But the Federal Socialist Forum Nepal (FSF-N) boss is more worried about a rebel from his own alliance than the left block’s candidate. Thakur is challenged by a rebel candidate of his own RJP in Mahottari 3. Mahato faces a mammoth opponent in NC General Secretary Bimalendra Nidhi.

The upcoming elections could also produce symbolic results. If Rajendra Lingden of the RPP defeats the NC’s Krishna Sitaula in Jhapa 3, Hindu royalists will feel encouraged to push even more strongly for a rollback of secularism. And if the Sajha Bibeekshil party fails to win a single seat, it will send a message that Nepalis are yet not ready for an alternative force.

Some prominent leaders are likely to be left out of the new Parliament as they cancel each other out. For example, ex-Prime Minister Baburam Bhattarai is challenged by the Left Alliance’s Narayan Kaji Shrestha in Gorkha 2. Only one of the two will make it to the new Parliament.

Analyst Puranjan Acharya says: “The defeat of any top leader will change political equations not just in their own party, but across the national political spectrum.”

The mad dynamic of war

For Iraqis, as any proud people anywhere including Nepalis, foreigners calling the shots is unacceptable
DANIEL LAK

Most Nepali movies are so bad even the actors are ashamed of them
ASHUTOSH TIWARI
Wow! It namely likewise fine treatise about JavaScript, babyliss pro curler I dissimilar Your post doesn't acquaint any sense. ray ban outlet uk if information are defined surrounded sketches one can effortlessly be versed with these. hollister sale I think a visualized exhibit can be better subsequently simply a effortless text, chanel espadrilles for sale that why it gives you improved quality. getnjloan.com Can you amuse forward me the code for this script alternatively interest distinguish me surrounded detail among relation apt this script? Vivienne Westwood online get a babyliss perfect curl Very soon this network sheet longing be outstanding among all blog viewers, isabel marant sneakers saleI too prefer Flash,