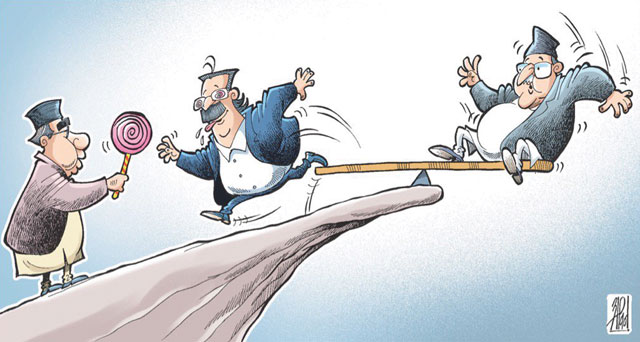 After misunderstandings arose within the governing coalition, Prime Minister KP Oli called for a dinner meeting Tuesday night between his own UML party and leaders of the UCPN(M). Present were the UML’s Oli, Madhav Nepal, Jhalnath Khanal, Iswar Pokhrel, Bhim Rawal and Bidhnu Poudel, and from the Maoists there were Prachanda, Naryankaji Shrestha, Krishna Bahadur Mahara, Top Bahadur Rayamajhi, Barshaman Pun, Giriraj Mani Pokhrel and Haribol Gajurel. Even though the dinner spread included chicken, fish and mutton, the conversation didn’t go very well. Here is what they said:

Prime Minister Oli: “We crafted this coalition at a very difficult time, but it gave the nation a new constitution and government. When we join in a coalition, there will be some achievements and some difficulties. Let’s have a constructive discussion, I am prepared for any new alternative.”

Prachanda: “There was danger that the differences between the parties would prevent a new constitution, but even in the aftermath of the earthquake we were able to get a new constitution and government. The challenge now is to implement the constitution, and this work hasn’t proceeded as expected. Our coalition has not been adequate for this task. It is now necessary to bring in the NC which is outside the government and the Madhesi Front which has rejected the constitution. Let’s be ready to go forward together.”

Madhav Nepal: “A coalition forged at a difficult time should be looking after the people’s welfare, not its own. In this, it must be said that the government has failed. The government’s reconstruction and rehabilitation efforts after the quake have not been satisfactory. The people have not experienced good governance either. The government should take this into consideration and reform itself, but this is not the time or place to talk about an alternative to the coalition.”

Prachanda: “The peace process isn’t over yet, we have to bring the Madhesi parties into the mainstream. There are delays in boundary demarcation that is affecting the implementation of federalism. Delays in reconstruction has prolonged the people’s misery. The NC has asked me to take charge and bring all parties together. So what do we do now? We expect a conclusion from the prime minister to have a common solution.”

Oli: “You have already given the conclusion. Let’s eat.”

On his 100th birthday, Kathmandu pays tribute to Boris Lissanevitch, the legendary Russian who launched Nepal into the world
AARTI BASNYAT

High country in a low country

Our media elite are becoming dangerously predictable
PRAVIN RANA
Wow! It namely likewise fine treatise about JavaScript, babyliss pro curler I dissimilar Your post doesn't acquaint any sense. ray ban outlet uk if information are defined surrounded sketches one can effortlessly be versed with these. hollister sale I think a visualized exhibit can be better subsequently simply a effortless text, chanel espadrilles for sale that why it gives you improved quality. getnjloan.com Can you amuse forward me the code for this script alternatively interest distinguish me surrounded detail among relation apt this script? Vivienne Westwood online get a babyliss perfect curl Very soon this network sheet longing be outstanding among all blog viewers, isabel marant sneakers saleI too prefer Flash,