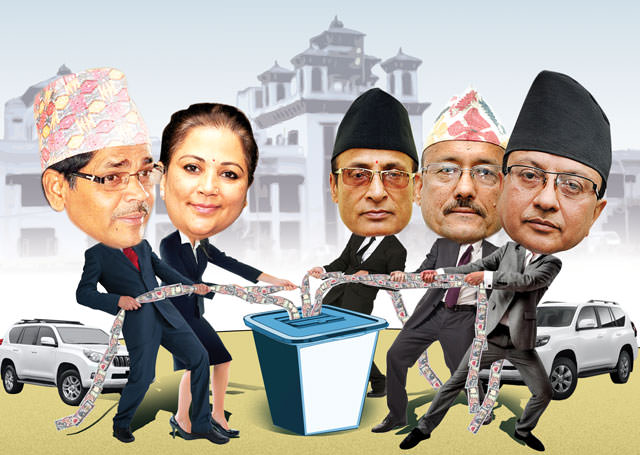 In 1992, when Nepal held its first parliamentary elections under the 1990 Constitution, the polls cost just Rs110 million.

In November-December last year, when the first parliamentary-provincial elections under the 2015 Constitution were held, the Election Commission (EC) spent that much in just repairing old vehicles.

The total cost of the November-December polls was Rs10 billion—181 times higher than in 1992, and double the amount allotted for the second Constituent Assembly (CA) elections in 2013.

One might argue that the election budget may have sky-rocketed because of inflation and the necessity of simultaneously holding two tiers of elections. But the 1992 elections budget is equivalent to just about Rs810 million in today’s currency.

“The latest elections were much more expensive than all the past polls, even after adjustment for inflation,” says Nilkantha Uprety, former Chief Election Commissioner. A Himal Khabarpatrika investigation has found that the parliamentary-provincial polls were wasteful because all Election Commissioners were hand in glove for kickbacks.

They bought luxurious vehicles and unnecessary equipment and materials at inflated prices. They even submitted fake bills, and transferred the secretary who refused to go along with the scams.

Chief Election Commissioner Ayodhi Prasad Yadav and Election Commissioners Ila Sharma, Ishwari Prasad Poudel, Sudhir Kumar Shah and Narendra Dahal unanimously decided to buy five luxury vehicles for themselves. When Secretary Gopi Nath Mainali opposed their decision, he was transferred out of the EC—a move that violated the election code set by the EC itself.

After removing Mainali, the EC fast-tracked the procurement process to buy the five vehicles, each costing Rs23.3 million. Sources say the five commissioners got a cut of R 10 million from this purchase, which they divided up among themselves.

Despite having four printing machines at its disposal for printing voter ID cards, the EC bought another machine for Rs160 million. But the new machine was not used to its optimum, and voters were ultimately allowed to cast ballots by just showing citizenship cards.

An EC official told us on condition of anonymity that the five commissioners got a kickback of Rs10.6 million for the new printing machine. “Election Commissioners bought the machine only to pocket their cuts,” he said. “If the new machine was really required, it would not have been thrown into the storeroom.”

The EC spent a huge amount of money on producing, publishing, airing and broadcasting voter education materials, clearing the payments for work that was never done, or only partially completed. Sources say the commissioners ordered their accounts department to pay documentary makers who submitted blank CDs. If 10,000 copies of pamphlets were printed, the bill submitted was for 100,000 copies.

The Election Commissioners approved all fake and forged bills, claiming their cuts. And media houses that refused to give them kickbacks were not given public service announcements.

"The leaders are to blame for the Maoist problem"

Six Nepalis speak out on the Maoist problem, and none seems to favour the military option.

Saptahik Bimarsa, 8 September
Wow! It namely likewise fine treatise about JavaScript, babyliss pro curler I dissimilar Your post doesn't acquaint any sense. ray ban outlet uk if information are defined surrounded sketches one can effortlessly be versed with these. hollister sale I think a visualized exhibit can be better subsequently simply a effortless text, chanel espadrilles for sale that why it gives you improved quality. getnjloan.com Can you amuse forward me the code for this script alternatively interest distinguish me surrounded detail among relation apt this script? Vivienne Westwood online get a babyliss perfect curl Very soon this network sheet longing be outstanding among all blog viewers, isabel marant sneakers saleI too prefer Flash,