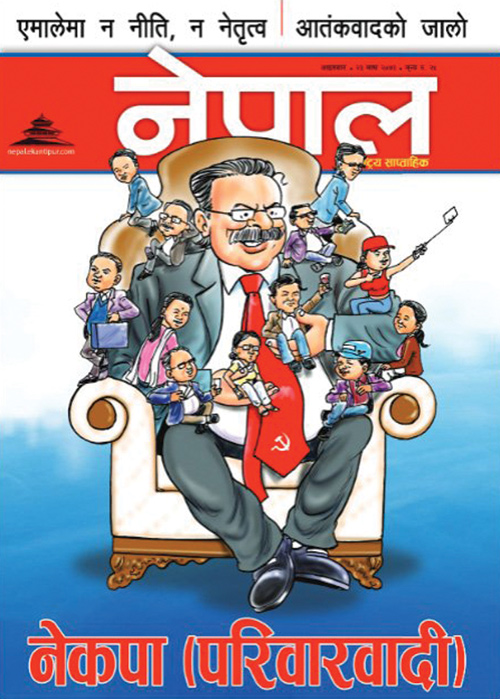 When the CPN (Maoist-Centre) had only 2,483 CC members, the party Chair and Prime Minister Pushpa Kamal Dahal’s 14 family members were among them. The party secretariat increased the number of CC members to 3,999 in December, and Dahal’s youngest son-in-law also found a place.

When the Maoists declared a war in 1996, Dahal’s two daughters Renu and Ganga were in Kathmandu. After police raided the houses of rebel leaders, they were taken to New Delhi where they got married.

After the ceasefire in 2006, Renu came to Kathmandu with her husband Arjun Pathak. Both of them are now the CC members of the party. Ganga’s first marriage did not work out, and she later married Jiban Acharya. Ganga was already a CC member. Jiban too was inducted into the party executive committee.

Dahal’s wife Sita and son Prakash are not active in party policy, nor have they ever trained Maoist cadre. Prakash is just a body guard of his father, and Sita is only Dahal’s consort. But they are both CC members of the party.

“What is Prakash’s contribution to the revolution other than accompanying his father?” Maoist MP Shyam Shrestha asks. “If accompanying the Party chair would be enough to qualify as a CC member, then we should induct all bodyguards and orderlies into our executive committee.”

Maoist MP Shrestha says: “Our leaders prefer to handpick their family members to stop more competent leaders from rising up and challenging their authority.”

With the Maoists now on board, it looks like someone else is causing trouble
CK LAL

Editorial in Nepal Samacharpatra, 24 January
Wow! It namely likewise fine treatise about JavaScript, babyliss pro curler I dissimilar Your post doesn't acquaint any sense. ray ban outlet uk if information are defined surrounded sketches one can effortlessly be versed with these. hollister sale I think a visualized exhibit can be better subsequently simply a effortless text, chanel espadrilles for sale that why it gives you improved quality. getnjloan.com Can you amuse forward me the code for this script alternatively interest distinguish me surrounded detail among relation apt this script? Vivienne Westwood online get a babyliss perfect curl Very soon this network sheet longing be outstanding among all blog viewers, isabel marant sneakers saleI too prefer Flash,