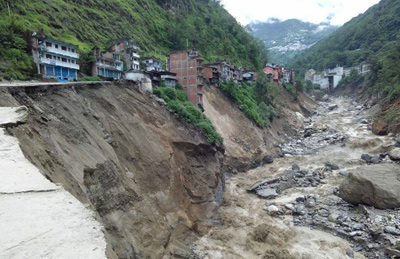 A flash flood on the Bhotekosi River - that flows down from Tibet to Nepal - has swept away at least 21 houses in the Tatopani village of Sindhupalchok district.

Four vehicles, including two cargo containers parked at Tatopani, were also washed away. The flood has also damaged the building where an integrated office of immigration, customs and security was set up near the Nepal-China friendship bridge after last year’s earthquakes.

Police had alerted the locals to run to safety as water levels in the river rose alarmingly. Sindhupalchok’s CDO Gokarna Mani Dawadi called the Chinese authorities to find out the cause of the flood and was told that a massive landslide caused by heavy rainfall on the Tibetan side had blocked the river about five kilometers upstream from Tatopani. The dammed river finally burst through on Tuesday night.

The flood has also damaged the 30 km Tatopani-Lamosangu section of the Kodari Highway, which was blocked by the massive Jure landslide in 2014 and in several other places by rockfalls triggered by last year’s earthquake. Tatopani was slowly limping back to normal after the road was cleared a few months ago, but the flood has once again turned it into a ghost town.

The locals say the last time they witnessed such a devastating flood was in 1980, when nearly 40 houses were washed away in Purano Barabise when a glacial lake in Tibet burst.

Nepal is not divided by mountains but by its rivers. You can walk across mountains, but rivers can only be crossed on a bridge. Over the decades, bridge-building has been honed into a fine art, and large parts
of Nepal are no longer remote.

Anil Shah-General Manager Nabil Bank Limited
Wow! It namely likewise fine treatise about JavaScript, babyliss pro curler I dissimilar Your post doesn't acquaint any sense. ray ban outlet uk if information are defined surrounded sketches one can effortlessly be versed with these. hollister sale I think a visualized exhibit can be better subsequently simply a effortless text, chanel espadrilles for sale that why it gives you improved quality. getnjloan.com Can you amuse forward me the code for this script alternatively interest distinguish me surrounded detail among relation apt this script? Vivienne Westwood online get a babyliss perfect curl Very soon this network sheet longing be outstanding among all blog viewers, isabel marant sneakers saleI too prefer Flash,