Chief Secretary Leela Mani Poudel has directed all the secretaries to make provisions to restrict foreign assistance to income generating medium and large- scale projects that provide direct employment. He has instructed secretaries to end the practice of accepting foreign assistance for smaller projects that take up too much of government’s time and extra resources on documentation, report writing and hiring consultants.

“Monitoring and evaluating smaller projects running on foreign assistance puts extra financial burden on the government and when resources are scattered the quality isn’t always consistent,” Poudel says in an 11-point directive, also issued to the National Planning Commission, the Prime Minister, and Finance Minister. 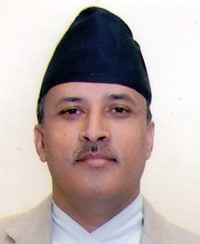 “This is the first time we have received a written directive from the Chief Secretary regarding issues of foreign assistance,” says Finance Secretary Shantaraj Subedi.

Poudel has also instructed secretaries to fine advisers or consultants who do not perform on time, or if there is negligence, even after the project completion.

Bhola Paswan in Naya Patrika, 20 September
Wow! It namely likewise fine treatise about JavaScript, babyliss pro curler I dissimilar Your post doesn't acquaint any sense. ray ban outlet uk if information are defined surrounded sketches one can effortlessly be versed with these. hollister sale I think a visualized exhibit can be better subsequently simply a effortless text, chanel espadrilles for sale that why it gives you improved quality. getnjloan.com Can you amuse forward me the code for this script alternatively interest distinguish me surrounded detail among relation apt this script? Vivienne Westwood online get a babyliss perfect curl Very soon this network sheet longing be outstanding among all blog viewers, isabel marant sneakers saleI too prefer Flash,