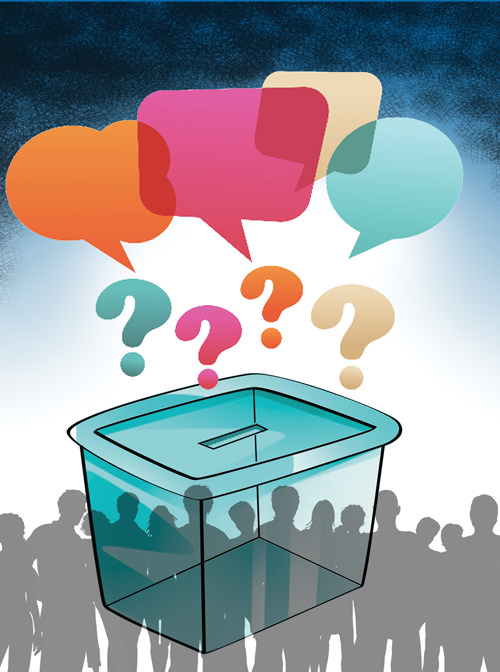 It has become a habit for Nepal’s rulers, most of whom have been with us since the restoration of democracy in 1990, to play brinkmanship. You just have to read the Flashback Editorial to realise how little things have changed in 15 years. Even the prime minister in 2002 was the same guy we have now, and he was playing the same games to stop elections even then.

The Nepali people have learnt from this long experience never to trust what their rulers say, and to always suspect that a conspiracy of some sort is hatching behind the scenes. That is why we hope for the best, but prepare for the worst. And so it is, with just over a month to go for provincial and parliamentary elections on 26 November and 7 December, that Nepalis are not talking about who they should vote for, but about whether the elections will even go ahead as scheduled. Politicians, as is their wont, are fanning the flames of uncertainty which the mass media duly transmits as evening talking heads on the screen – further confusing the people.

Enough already. It is time for a media moratorium on the extreme pronouncements of politicians because all they are trying to do is stay in the headlines by saying the most outrageous things, or misleading citizens and keeping them in the dark. The reason for such immaturity is the low intellectual level of most politicians, their famous greed and ambition which have been amply and in full display for the past 27 years.

Things became highly charged just after the holidays when the UML and the Maoists decided to form an electoral alliance leading to supposed unity of the two parties after polls. This upset the Nepali Congress’ apple cart, and it suddenly looked like it would be decimated by the left juggernaut. So the NC has allied with the Hindu-right RPP as well as the RJPN. Even Baburam Bhattarai, after flip-flopping, has come under the NC umbrella. Wonders never cease.

This phase of uncertainty began with a writ filed by a member of the ruling coalition in the Supreme Court demanding that there should be separate ballot paperes for parliamentary and provincial elections. The Court left it for the Election Commission to decide, which it did by passing the buck to a task force. The same person then filed a Contempt of Court which then asked the EC for clarification. These events, played out from one day to the next on the front pages of the papers have completely confused the people.

Even so, despite an early onset of winter, high mountain districts voting in the first phase on 27 November are caught up in the heat of campaigning. There is tremendous interest among voters about the elections, and the traditional politicians from the mainstream parties are being grilled about their past misdeeds and promises not kept.

To be sure, the political parties deserve credit for bringing the country out of war, and despite the prolonged transition, promulgating a new Constitution under which there have been local elections and hopefully national polls soon. We may be taking one step back every time, but we always manage to take two steps forward.

However, it must be said that Nepal does not have stability, governance and economic strength because of the lack of accountability, gross neglect and fecklessness of these same parties. Our only hope is that there are enough promising young leaders within the main parties as well as the new anti-corruption Sajha Bibeksheel to take this country forward.

The onus is now on the voters to exercise their franchise and not elect lawbreakers to the new law-making body.

In a maze, Kunda Dixit