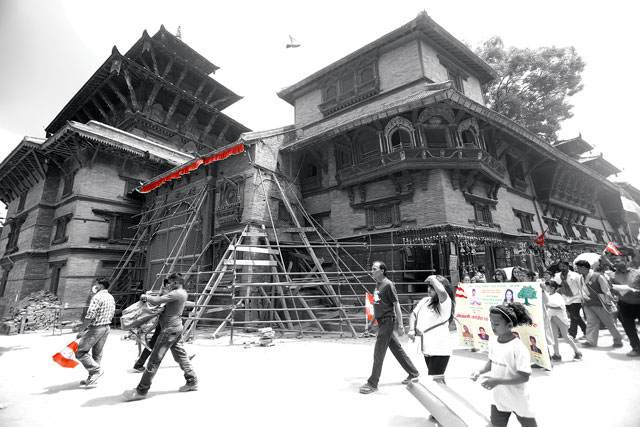 Earlier this year, after Nepal’s first local elections in 20 years, the new mayors and village council heads looked lost. There were no clear guidelines about their roles and responsibilities, their jurisdiction and budget. Many did not even have offices to work from.

This exact scenario is going to repeat itself after parliamentary and provincial elections, the first phase of which takes place in 32 mountain and hill districts next week. The second phase will be held in the remaining 45 districts on 7 Dec.

The 275 members of the new federal Parliament, who will be elected both directly and through proportional representation quotas, may not face problems of logistics and confusion about their responsibilities. But the 550 members of seven state assemblies will be in uncharted territory — they will probably waste months, if not years, trying to figure out their roles.

Voting amidst the ruins, Shreejana Shrestha

With only days to go, the government has not even prepared for the appointments of the chiefs of state. As per the Constitution, the seven chiefs are supposed to chair the first meeting of the state assembly within 20 days after elections, and appoint chief ministers within 35 days.

Another potential hot potato is the selection of provincial capitals. An independent report has proposed seven cities, but the government is sitting on the report before elections, fearing a political backlash. Small problems have a tendency to blow up into major crises in Nepal, and the establishment’s inability to foresee them is why Nepal is where it is today.

As one cynical official in the Obama White House once said, a disaster is a great political opportunity. The 2015 earthquake provided politicians a god-given chance to prove to voters their abilities. The aftermath of the quake provided more openings for politicians to show they could rush relief and reconstruction during an emergency, but politics got in the way as the National Reconstruction Authority became a proxy battleground.

Nearly three years after the earthquake, therefore, survivors have been left largely to fend for themselves. The election provides one last chance for newly-elected, local, provincial and national representatives to get things right, not just on reconstruction but also earthquake preparedness in the rest of the country, as well as long-term development.

These elections should have been a historic chance for us to make a course correction and move the country forward. But it pains us to say that even before voting starts, we have already squandered the chance to set things right by selecting notorious outlaws and failed personas from the past as candidates for making the laws of the land.

Interview with Minister of Information, Mohammad Mohsin
Wow! It namely likewise fine treatise about JavaScript, babyliss pro curler I dissimilar Your post doesn't acquaint any sense. ray ban outlet uk if information are defined surrounded sketches one can effortlessly be versed with these. hollister sale I think a visualized exhibit can be better subsequently simply a effortless text, chanel espadrilles for sale that why it gives you improved quality. getnjloan.com Can you amuse forward me the code for this script alternatively interest distinguish me surrounded detail among relation apt this script? Vivienne Westwood online get a babyliss perfect curl Very soon this network sheet longing be outstanding among all blog viewers, isabel marant sneakers saleI too prefer Flash,