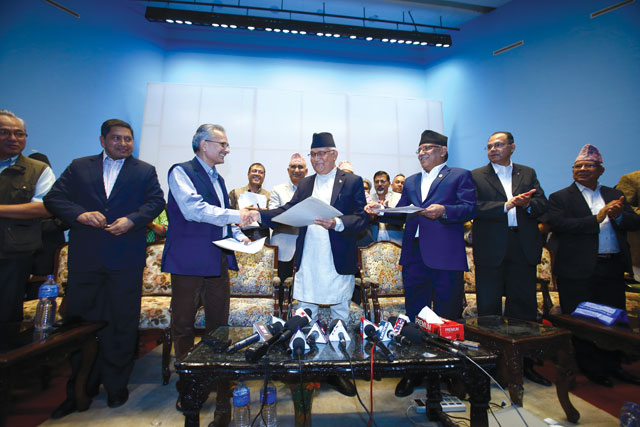 In Nepal’s over-politicised and polarised national milieu, it can only be a good thing that there will be fewer political parties – especially those of the Communistic persuasion. At one point after 1990, there were 17 registered Communist factions: from adherents of hirsute European philosophers of the 19th century, disciples of Comrade Vladimir Ilyich or Uncle Joe, those who admired Mao Zedong so much that they didn’t just emulate his justification of mass murder but even copied his hair style, and those who still swear by Kim il-Sung.

After an ill-conceived war that left at least 17,000 Nepalis dead and devastated the country and its economy, the main Maoist faction has decided to form an electoral alliance with a party that, despite the ominous-sounding Communist Party of Nepal Marxist-Leninist name, is supposedly left-leaning.

Contrary to the usual tendency of Communist factions to prefer alliances with the far-right rather than to a party immediately to the right of them, the comrades have decided to work together. Into this grand alliance, they have also invited the chief Maoist ideologue, Baburam Bhattarai, who had been in the wilderness after having left the parent party.

It has become a habit here to be cynical about politicians, and that is because they have discredited themselves so badly since the restoration of democracy in 1990, and more so after the ceasefire in 2006. The fact that many of the main players are Brahmin men and relics from a generation ago doesn’t help in according them more public respect and credibility. Don't expect any progress on transitional justice from this lot. Nepal is now effectively going to be a bi-partisan state and elections will be a two-horse race.

In spite of all that, we still believe the left alliance of the UML, Maoist Centre and the New Force is a positive step. If it can withstand greed and ambition after the November elections, and if it has visionary and cooperative leadership there is chance that this could indeed lead to the greater political stability that is needed for Nepal’s long-awaited great leap forward. That is a lot of if’s.

In their raucous pact-signing on Tuesday evening at the Nepal Academy, the three parties agreed to first join hands in dividing up tickets for election candidates on a rough 60:40 ratio, and ultimately to unite the three parties. The aim seems to be to ensure a two-thirds majority in the new Parliament so that legislative negotiations and passing future amendments to the Constitution will not be deadlocked, as they are now.

It is understandable that the Nepali Congress is spooked. Prime Minister Sher Bahadur Deuba never expected coalition partner Pushpa Kamal Dahal of the Maoists to stab him in the back, and tried till the last minute to convince Dahal to reconsider. The Maoist leader told him the ship had left port, but assured him he would not disturb the election government. The NC has now forged its own poll alliance with the Madhes-based parties and the RPPs.

The love triangle between the UML’s KP Oli, Dahal and Deuba goes back a long way, and this week’s realignment proves once more that there are no permanent friends, or foes, in politics. This time it seems to have been prompted by necessity. The UML lost the Tarai in the Province 2 elections, and needs to regain the plains vote bank for November polls.

The Maoists did better than they expected, which convinced Oli that he cannot yet write off Dahal. The strong showing of the NC in the Tarai also seems to have alarmed the Comrades. The NC and the Maoists appear to have belatedly realised that theirs was an unnatural and incompatible relationship. So, the recently divorced UML and Maoists got back into bed.

The political promiscuity among the NC-UML-Maoists had got pretty shameless. But it is proof that politics is the art of the possible. And necessity. Pre-poll alliances are better than post-poll bargaining for ministerial berths – proof of which is the current coalition with its mammoth 56-member council of ministers. The left alliance may also prompt some rethinking within the NC, which has lost its way from its founding egalitarian cause. The three parties have said they will pursue social justice and a socialist path to prosperity. We will have to wait and see if this semi-merger is indeed ‘historic’, or just an opportunistic electoral pact.

Dahal and Oli have justified the new alliance as a partnership between ‘nationalist’ forces. Waving the flag against perceived external enemies has always been a good electoral strategy. But the Nepali people are tired of hollow nationalism and empty slogans: the New Left has one last chance to convince voters it can actually deliver.

A Vote for Amendment