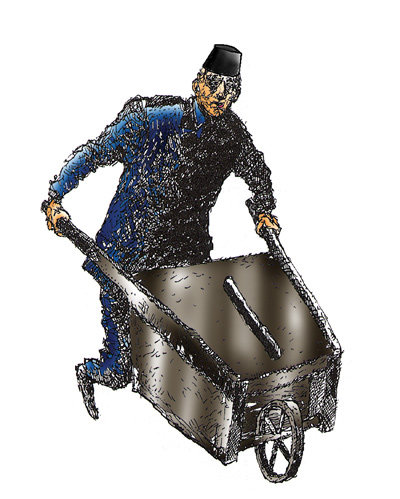 The mood after every election in Nepal since 1960 is always upbeat. It is what comes after, that lets the people down. Voters go to the polling stations in overwhelming numbers, and wait patiently in line for hours to dutifully cast their ballots, only to be let down by the same leaders they elect over and over again.

The 70% turnout in last week’s election was expected and polling and vote-counting went smoothly in most places. The real surprise was the landslide that the UML-Maoist combine mustered. Pundits have dissected the unprecedented victory, citing their stability-prosperity slogan, the united focus on individual races to defeat incumbents, the complacency and weak leadership in the Congress, and the disarray in the Democratic Alliance.

The Congress’ scare tactic of warning about Communist dictatorship didn’t work: in fact voters showed that they don’t mind bringing in a bulldozer to shake things up. This is a huge lesson for the NC, which had lost its way long ago and strayed far from BP Koirala’s social democratic path. As a web post this week put it: ‘The NC needs to first drain the swamp, hit reset… and not rinse and repeat.’ Indeed, the NC needs to set its own house in order, and now play the check and balance role of the parliamentary opposition. The Left, too, has to keep the promise of its Promised Land.

We are moving into the uncharted territory of federalism. Six months after local elections, the main parties have been reluctant to grant municipalities and villages the autonomy they are supposed to enjoy. Federalism is about political devolution, and a strong centre must abide by the spirit of the Constitution to grant the regions autonomy, and not try to squeeze them by choking off their money supply. It was Nepal’s centralised polity that neglected large parts of the country and excluded many in the past. This Constitution was crafted to set that right.

The Left Alliance was an electoral marriage of convenience for elections. It remains to be seen whether it will lead to the communist parties uniting. The Maoists appear to have also been partly motivated by the need to brush wartime excesses under the carpet. Many candidates who took part in human rights violations have become legislators. One of the pre-requisites to stability is the re-establishment of the rule of law, ending impunity and ad hoc governance.

Recent elections have also exposed the need for electoral reforms (see Guest Editorial by Bhojraj Pokharel). These are some of the serious inadequacies that need to fixed:

Allow absentee balloting. Nearly 20% of voters were disenfranchisaed this time because they could not travel to home districts to vote.

Force parties to be transparent about electoral financing, and set limits to expenses.

Lift the ban on public transport on E-day.

Clean up leakage and waste within the Election Commission.

Corruption control as an excuse for political witch-hunts
ARTHA BEED

LTTE, JVP and the Maoists

Sagacity is what Nepalis also need today from their rulers
KANAK MANI DIXIT
Wow! It namely likewise fine treatise about JavaScript, babyliss pro curler I dissimilar Your post doesn't acquaint any sense. ray ban outlet uk if information are defined surrounded sketches one can effortlessly be versed with these. hollister sale I think a visualized exhibit can be better subsequently simply a effortless text, chanel espadrilles for sale that why it gives you improved quality. getnjloan.com Can you amuse forward me the code for this script alternatively interest distinguish me surrounded detail among relation apt this script? Vivienne Westwood online get a babyliss perfect curl Very soon this network sheet longing be outstanding among all blog viewers, isabel marant sneakers saleI too prefer Flash,