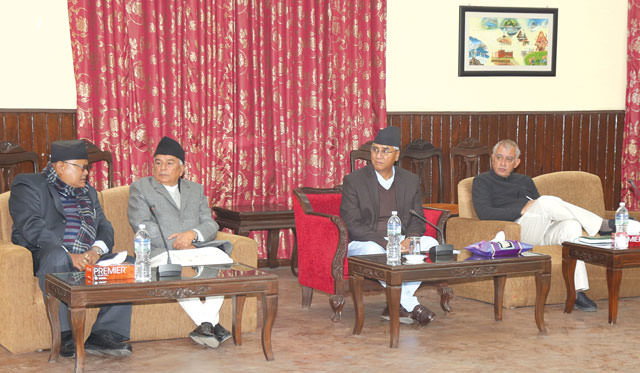 After the Left Alliance won a near two-thirds majority in the November-December elections, many analysts voiced concerns over the future of Nepal’s democracy. They were alarmed not because they believed the NC’s propaganda that the UML-Maoists would impose authoritarian rule, but because they thought a weak opposition would be unable to curb the rise of a kleptocracy.

What is now apparent is that the threats to democracy are not from the Left Alliance, but from the NC itself because it refuses to relinquish power even after being roundly defeated. It is now clear that the NC will be an even weaker opposition because of an erosion of the little public support it had.

The way it has been functioning after being voted out shows that Nepal’s pioneer democratic party has not learnt any lessons. It now commands very little moral authority to hold the government to account. This lack of a strong opposition does not bode well for democracy and good-governance — something Nepal really needs to strengthen and improve.

The NC first tried to drive a wedge between the UML and the Maoists, ignoring their clear electoral mandate. Maoist Chair Pushpa Kamal Dahal, suspicious of a possible coalition between the UML and the FSFN, had a brief dalliance with the Forum. When that didn’t work, the NC began using every trick in the book to delay the transfer of power.

In the meantime, the outgoing Sher Bahadur Deuba government is trying its best to plunder the state coffers, doling out millions to its cadre. Despite his caretaker status, he has been making political appointments.

The NC establishment has not conducted any introspection about its electoral rout, and how it can regain the people’s trust. Deuba has finally called a meeting of the NC’s central working committee, but he is reportedly unwilling to analyse why the party lost. Other top NC leaders also seem more interested in finding a way to sneak back into Singha Darbar than playing the role of a constructive opposition.

The Deuba government finally named the chiefs and temporary headquarters of seven provinces on Wednesday. But it took much longer than necessary, which was a result of its efforts to cling to power. Naming of temporary headquarters has sparked protests and strikes in several parts of the country. People who wanted their cities to be provincial capitals are on the warpath.

The government rightly chose temporary headquarters only. It did not, and cannot, declare where provincial capitals will be. This is a constitutional right that only state assemblies can exercise. But the NC government has downplayed this constitutional truth, hoping against hope that the protests might escalate so that the Upper House election will have to postponed. That just might be a self-fulfilling prophecy.

Deuba is probably hoping to buy time to make another attempt to scuttle UML-Maoist unity if the Upper House is not elected on 7 February. But this makes the NC even more unpopular, and it will harm its prospects of bouncing back in the next elections. Its failure to emerge stronger could actually give a united communist government a free hand.

Editorial, 31 August
Wow! It namely likewise fine treatise about JavaScript, babyliss pro curler I dissimilar Your post doesn't acquaint any sense. ray ban outlet uk if information are defined surrounded sketches one can effortlessly be versed with these. hollister sale I think a visualized exhibit can be better subsequently simply a effortless text, chanel espadrilles for sale that why it gives you improved quality. getnjloan.com Can you amuse forward me the code for this script alternatively interest distinguish me surrounded detail among relation apt this script? Vivienne Westwood online get a babyliss perfect curl Very soon this network sheet longing be outstanding among all blog viewers, isabel marant sneakers saleI too prefer Flash,