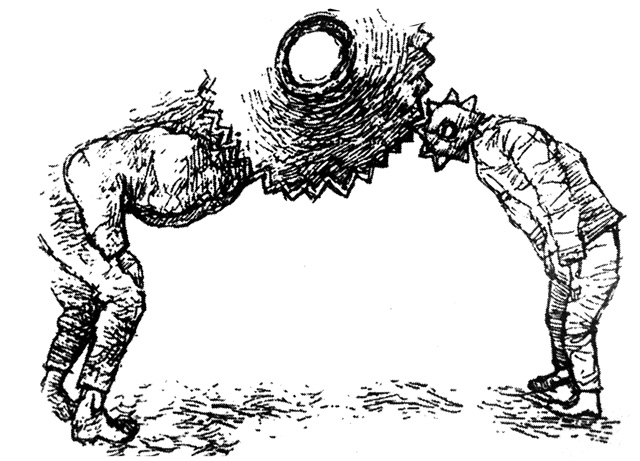 Not in recent memory has Nepal had a weaker government than now. The NC-Maoist coalition was forged after UML Prime Minister KP Oli had the rug pulled from under him by Pushpa Kamal Dahal last year. Like a love triangle, Dahal ditched Oli and hitched himself to Sher Bahadur Deuba. Under their “gentlemen’s agreement” Dahal became PM first and then handed the baton to Deuba in June.

Although the NC was the biggest party in Parliament after the 2013 CA elections, its moral mandate has been eroded by recent local elections. Deuba himself is PM for the fourth time, and is weak and indecisive, taking three weeks to cobble together a cabinet. He was ridiculed for reading out the wrong speech to flood victims in Saptari, and reviled on the Net for angrily refusing to answer questions on BBC's Sajha Sawal.

The Maoist-Centre is a distant third in Parliament, and its once-revolutionary roar has become a meow. A party conclave this week analysed the reason for such a humiliating setback in local elections, and to chart out a future strategy for the third phase of local elections and for provincial and parliamentary polls later this year.

The Deuba coalition has concluded it will not be able to muster the two-thirds required in Parliament to amend the Constitution, as demanded by the Madhes-based parties, after the RPP decided not to be on board. It is therefore distributing ministerial portfolios to more parties. This is the paradox of Nepal’s bhagbanda politics: Issues of long-term national importance in the Constitution are decided by petty party interests for short-term cabinet posts.

The NC-Maoist coalition never really wanted the amendments anyway, so last week it hurriedly declared it could not meet Madhesi demands because of the RPP and UML. The Tarai-based RJPN has been weakened by a semi-mutiny in its ranks and its failure to stop local polls.

However, it will be a mistake if the ruling coalition and the main opposition use the enfeebled RJPN and FSFN to ignore the demands of the disenfranchised in the mountains and Tarai for better representation and respect in the new Constitution. It will be an even bigger blunder if the main parties start acting on a plan being floated to extend Parliament after its mandate terminates in January 2018.

The UML may feel triumphant after the local election results and be tempted to twist the dagger, but it now has an even greater responsibility to bring disparate forces together. It is for this reason that a main opposition party in parliamentary systems is called a ‘shadow government’ – so it rises above differences to uphold the national interest. The UML should show leadership in pushing new amendments that address the grievances of the marginalised while at the same time safeguarding national unity.