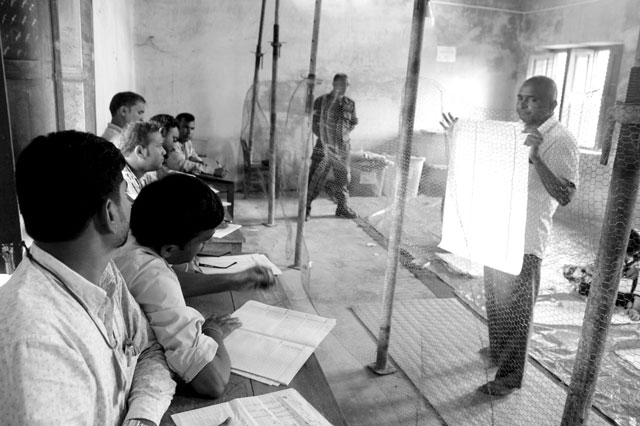 Dasain probably has its origins in a proto-Hindu harvest festival, hence the priority given to food, family and festivities. The myths came later. The weather adds to the joyous air, the clouds have parted, there is a nip in the air, the hills are emerald green, and the mountains wear fresh new coats of snow. Together with our shared history and the Nepali language, Dasain is what binds Nepal. The festival has transcended its religious antecedent to become a time for families and for the nation to unite in common celebration, and revive our collective hope for the future.

This year, Dasain was preceded by the third phase of local elections in Province 2 and will be followed by preparations for provincial and parliamentary elections in November and December. Many had expected turnout in the Tarai to be low because of the devastating floods, and grudging acceptance of the election by Madhes-based parties. The results are trickling in, but the 77% turnout shows the Tarai public is in favour of moving ahead. Since these were elections for local governments, it can also be a referendum in favour of autonomy.

From the results so far, in which the combined total of the Madhes-centric RJPN and FSPN — as well as the NC and the Maoists, who say they are for changes in the Constitution — means that voters in Province 2 have sent a strong message that they favour amendments. As expected, voters in the Tarai have told off the UML and its brand of nationalisitic politics. The Maoists appear to have done well in the Highway Belt, where there are larger pockets of mountain settlers. The results therefore are a warning to Kathmandu not to mistake taking part in elections as a rejection of the demand for amendments.

However, the heavy turnout as well as the strong showing of the mainstream national parties, especially the Nepali Congress, is a sign that while voters of the Tarai may not be completely satisfied with the Constitution, they reject the politics of confrontation and have given a mandate to their leaders to fix things as we move along.

We are now finally nearing the end of a two-decade-long political transition. The peace process has dragged on, and we waited years haggling over the kind of federalism and the names of provinces and their borders, only to find out now that all the people wanted were jobs at home so they wouldn’t have to migrate, affordable education and medical facilities, electricity and fuel, and to be left alone to pursue their own happiness.

Since we do not expect much from a government led by a four-time Prime Minister, we are not disappointed when he does not perform. A few eyebrows were raised last week when Prime Minister Deuba expanded his cabinet to 54 members, and when he added two more ministers this week people just yawned. The PMO has shown that it has nothing but contempt for the Constitution, which mandates a maximum 25-member government.

It has violated the Election Code of Conduct, blatantly transferring and promoting civil servants, doling out funds and behaving as if it is a law unto itself. Deuba’s ministers are all out to rake it in while the going is good, as was seen by high-profile scandals. Now, the Prime Minister is off to New York even as the three-party cartel passes bills on education and health that would be detrimental to the welfare of citizens. Newly-elected local governments have not yet been given the authority to run their villages and municipalities, and the government is planning to centralise taxation and cut off their money supply.

Nepal’s economic growth rate has been scaled down to 4.5% after this year’s floods, but the structural problems with investment and job creation have more to do with the collapse of the rule of law, corruption and impunity. Nepal’s three-party syndicate has taken it upon itself to command our destiny, but it has proved itself incapable of thinking beyond tactical moves to outsmart rivals within their own parties, or in other parties.

For this Dasain, we can only hope that Nepal will muddle through despite its feckless and reckless rulers, and that the coming elections will give the people the chance to vote in real change-makers.

Taking politics out of the economy, Om Astha Rai

Last but not the least, Editorial