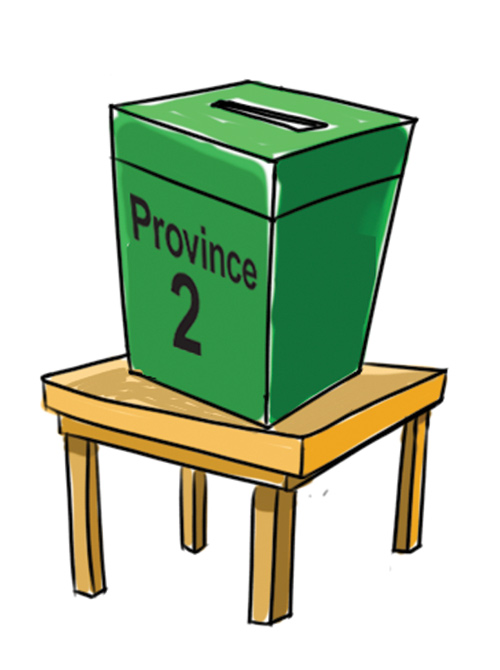 Wednesday’s Second Phase of local elections in Provinces 1, 5, 7, in which 70% of 6.5 million eligible voters cast their ballots for municipal, village and ward councilors once more proved the adage that democracy is the worst form of government except for all the others. In Nepal we have learnt to be satisfied with just holding elections, no matter how flawed, because not having them is infinitely worse.

The vote counting has begun, but a dangerous precedent has been set by Bharatpur Municipality, which still hasn’t declared a winner from the First Phase. Previous prime minister Pushpa Kamal Dahal of the Maoists put up his daughter, Renu, as a candidate for mayor, and in a backroom deal with current prime minister Sher Bahadur Deuba of the NC, got the sure-fire winner for mayorship to step down and the NC to back her. They were neck-to-neck but when the UML edged ahead, Maoist supporters tore up ballot papers. Instead of going ahead with counting, the Election Commission waffled and announced re-polling. The matter is now in the Supreme Court, and the winner has still not been announced. There is nothing to stop the Maoists, or any other party for that matter, from tearing up ballot papers again. It seems an easy way for losers to sabotage results.

To prevent a recurrence, security at counting centres must be tighter and the Election Commission should stand up to political interference. The second phase also saw a lot more alliances between the main parties, especially the NC and Maoists, in order not to cut each other’s votes and prevent the opposition UML from another strong showing. But the large turnout proved that this was a referendum in favour of elections (see coverage page14-15).

All eyes now will be on the Third Phase in Province 2. The Madhes-based RJPN alliance has isolated itself to these six districts in the Eastern Tarai, and polling there will be the most contentious because of its demand for constitutional amendments first. The aim should be not to wait till September, but to bring the RJPN onboard and hold those elections ASAP. Only then can we focus on the provincial and parliamentary elections that must be held by the constitutionally mandated deadline of 21 January 2018.

As former election commissioner Neel Kantha Uprety suggests in the Guest Editorial (below) the two polls can be held together and there are ways to streamline voting. But first, the Provincial Boundary Demarcation Committee must satisfy all parties. This is fraught, because the dispute over provinces is what delayed the constitution-writing process for so long.

There are even those who suggest that instead of opening the provincial can of worms all over again, Nepal should, for the sake of stability and to save money, build on strong local government, bypass provincial assemblies altogether, and opt for a two-tiered structure. Now, that’s a thought.

Is Hari Prasad Pandey just too honest for Nepal?
KEDAR SHARMA IN POKHARA

"A cold bath is physically and morally uplifting. Morally, because the operation involves a courageous decision and action."

Kantipur, 21 October
Wow! It namely likewise fine treatise about JavaScript, babyliss pro curler I dissimilar Your post doesn't acquaint any sense. ray ban outlet uk if information are defined surrounded sketches one can effortlessly be versed with these. hollister sale I think a visualized exhibit can be better subsequently simply a effortless text, chanel espadrilles for sale that why it gives you improved quality. getnjloan.com Can you amuse forward me the code for this script alternatively interest distinguish me surrounded detail among relation apt this script? Vivienne Westwood online get a babyliss perfect curl Very soon this network sheet longing be outstanding among all blog viewers, isabel marant sneakers saleI too prefer Flash,