Climate change crowds out all other crises, it is portrayed as a stand-alone problem whereas it is just another hardship that Nepal’s rural poor have to overcome 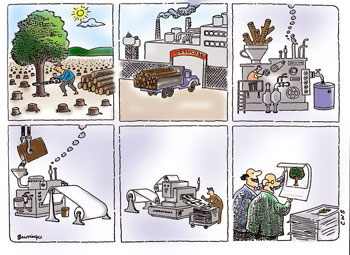 If there were any doubts still about the severity of the impact of climate change, four recent findings should put them to rest: the latest IPCC Report, the US National Climate Assessment, the ICIMOD update this month on Himalayan glaciers and the World Meteorological Organisation’s announcement on Tuesday that the concentration of carbon dioxide across the northern hemisphere has surpassed the climate change threshold of 400 parts per million for the first time in human history.

Put together, these represent ominous proof that, if anything, we have underestimated the scale and speed of global warming, and there is even less time than we thought to restore the equilibrium.

Over one generation, the glaciers in Nepal and Tibet have receded, snowlines have moved up the mountains, hundreds of lakes have appeared out of nowhere and are in danger of bursting. In the Hongu and Hinku basins in eastern Nepal, lakes don’t even have names because they were formed so recently. One lake below Mt Chamlang, called 464, could burst at any time if an overhanging serac falls on it, with catastrophic consequences downstream for the Dudh Kosi Valley.

It is natural that snow and ice gets all the attention for Himalayan climate scientists because it is so dramatic. But there are also less measurable changes in weather. Because climate causality is different from forecasting weather, scientists are still reluctant to draw a direct correlation between greenhouse gases in the atmosphere and the frequency and intensity of storms, droughts or cloudbursts. But that does not mean it is not happening.

Subsistence farmers in the rugged mountains of mid-western Nepal have always faced hardships, such as poverty, disease, illiteracy, discrimination and neglect by the state. The infant mortality rate there is three times the national average. Agriculture is almost entirely rainfed and farmers depend on timely monsoons to grow enough food. There have been monsoon failures before. Winter rains often never arrive, and there were years when unseasonal blizzards and flashfloods caused havoc. The people have learnt to live with all this: usually by migrating for work if they cannot feed their families. They have dealt with weather extremes before. Climate change is not new, it just makes all their existing problems worse.

Unfortunately, climate change now crowds out all other crises. It is often portrayed in academia, media and the donor agenda as a stand-alone problem that needs specific targeted responses through “adaptation” or “mitigation”. Actually, the rural poor of the Himalaya have always had to “adapt” and “mitigate” to cope with the underlying reasons for their poverty. The reason for their vulnerability is political: lack of good governance and accountability of a state that has abandoned them for centuries and continues to do so.

What makes the poor poor is their lack of options. If there is no irrigation system for their terrace fields on a mountainside, and if the monsoon fails, they have no choice: they have to migrate. Lessening their dependence on uncertain rains would open more doors for them. Income generation, skills development, or jobs would broaden their horizons. The effects of climate change will ultimately make farmers poorer because they will have even fewer choices than before.

Nepal’s rural poor has had to cope with hardships like food shortages, weather extremes and war, long before climate change came along. “Climate change” is a catch-all term that does not mean anything anymore, but can be blamed for everything, and lets everyone (politicians, bureuacrats, elected representatives) off the hook.

Whether or not Nepal switches to renewable energy is not going to save the planet. Nepal is already carbon neutral because our per capita carbon emission is 0.12 ton per year per person (Qatar is 40, the US is 19). But switching from fossil fuels to hydro will save our economy. Adopting the principle of ‘green growth’ and putting it at the centre of our national plans will allow us to protect the environment and ensure equity. Economic growth is lopsided and unsustainable if it is not inclusive and does not protect nature.

The new budget is the perfect opportunity to act on a green economy. Business as usual is not sustainable.

The State of the Himalaya, Apa Sherpa

Everything ends, especially dependence on finite natural resources for social, political and economic development.
DANIEL LAK
Wow! It namely likewise fine treatise about JavaScript, babyliss pro curler I dissimilar Your post doesn't acquaint any sense. ray ban outlet uk if information are defined surrounded sketches one can effortlessly be versed with these. hollister sale I think a visualized exhibit can be better subsequently simply a effortless text, chanel espadrilles for sale that why it gives you improved quality. getnjloan.com Can you amuse forward me the code for this script alternatively interest distinguish me surrounded detail among relation apt this script? Vivienne Westwood online get a babyliss perfect curl Very soon this network sheet longing be outstanding among all blog viewers, isabel marant sneakers saleI too prefer Flash,