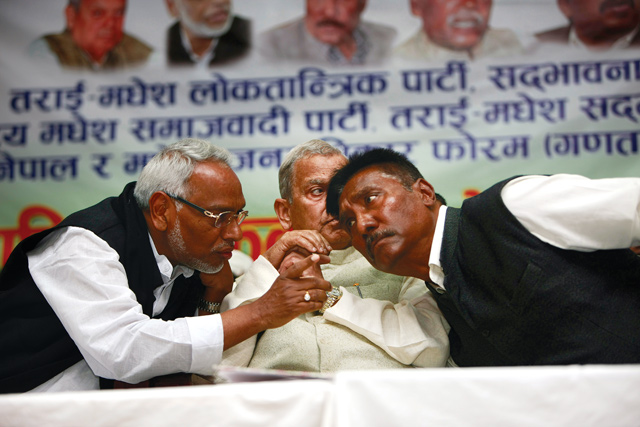 Prime Minister Sher Bahadur Deuba entered his official residence in Baluwatar for the fourth time in 20 years on Monday morning at 5:02AM. The reason for that odd timing was that he was waiting for the right planetary moment. He is now taking advice from vastu consultants for the interior decoration of both Baluwatar and Singha Darbar so that the furniture alignment will improve his political clout.

Political leaders in this part of the world often believe more in the stars than in their leadership abilities. Burmese junta leaders were into numerology. Thai generals consult astrologers before every move. In India, the main political tool is the horoscope. Our rulers have been so shaky about their position that they have often left their fate, and the fate of the country, to the planets.

Deuba is a man who was twice sacked by King Gyanendra for ‘incompetence’. The PM has a track-record of sabotaging elections in 2002 and 2005 and damaging democracy.

This time, too, all the vacillation and fumbling ahead of the four-time postponed second phase of local elections is not a good sign. Commentators are voicing suspicions that Deuba is up to his old tricks. The voting could, and should, have been done at one go on 14 May, but had to be divided into two phases to appease the new alliance of Madhes-based parties, the RJPN. There was finally hope that an ethnicity-based territorial party was trying to metamorphose into a national party. RJPN cadre even waved Nepal’s red double-triangle banner at their rallies in the Tarai (see Guest Editorial by Chandra Kishore below). But those hopes were soon dashed because every time guarantees are given about amendments, every time polls are put off, they have to be postponed again because the RJPN threatens to disrupt them. It has happened again: the second phase is finally slotted for 28 June in Province 1, 5 and 7, but they had to be deferred in Province 2 till September. And now the RJPN is saying it may not even agree to September unless its demands on amendments to the Constitution are met.

Moving the goal posts repeatedly like this allows Prime Minister Deuba to shift the blame on elections to the RJPN. Many local Madhesi leaders from the RJPN are fed up, and are fielding candidates as independents. Public opinion in the Tarai is for polls (see story on page 4) while working on amendments, and Mahant Thakur and Rajendra Mahato are competing for influence. Upendra Yadav’s FSFN is taking part as a national party.

The completion of local elections is important for stability, and the conduct of federal and Parliamentary elections later this year. The longer Province 2 holds out against local elections due to fear among RJPN leaders that they will lose, the longer this period of instability will continue.

Amidst the gloom, a hint of hope
KUNDA DIXIT

If 85 percent of college kids are for a republic, then that is the way we are headed
CK LAL

Question is what can we do till then to make a bad situation bearable?
NAVIN SINGH KHADKA
Wow! It namely likewise fine treatise about JavaScript, babyliss pro curler I dissimilar Your post doesn't acquaint any sense. ray ban outlet uk if information are defined surrounded sketches one can effortlessly be versed with these. hollister sale I think a visualized exhibit can be better subsequently simply a effortless text, chanel espadrilles for sale that why it gives you improved quality. getnjloan.com Can you amuse forward me the code for this script alternatively interest distinguish me surrounded detail among relation apt this script? Vivienne Westwood online get a babyliss perfect curl Very soon this network sheet longing be outstanding among all blog viewers, isabel marant sneakers saleI too prefer Flash,