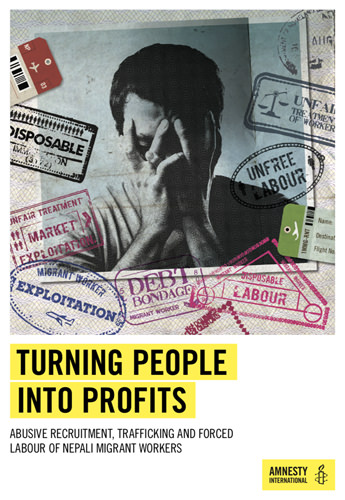 If there is one aspect of Nepal’s socio-economic condition that touches the life of just about every Nepali family today, it is migration. There is no other more damning indictment of governance failure and criminal neglect over the last 25 years. This is flagrant abdication by the political leadership of its primary responsibility of protecting its citizens.`

Human beings have historically been Nepal’s Number One export. Subsistence farmers fled indebtedness during the last two centuries to settle in Assam, Darjeeling and Bhutan, and young Nepali men started being recruited into British Gurkha regiments even before the Anglo-Nepal War ended in 1816, a process that continues to this day. Then there were the hundreds of thousands of young Nepali women trafficked first into India and now to the Gulf countries, duped into prostitution and abused by employers.

From Chitwan to Chiyoda, Kunda Dixit

Ironically it has been since the restoration of democracy in 1990 that the export of manpower to the Gulf and East Asian countries took off – largely because recruiters had political patronage and lubricated the electoral machinery of the parties with a cut of the profits they made from fleecing fellow Nepalis. More than 4 million Nepalis went abroad in search of work in the last 20 years, nearly all of them paid a hefty fee to manpower middlemen. And this number does not even include the unknown millions who have migrated to India seasonally for work.

The most searing condemnation of the inability and disinterest of the Nepal government to guarantee safe migration is Amnesty International’s report released earlier this year: Turning People into Profits: Abusive Recruitment, Trafficking and Forced Labour of Nepali Migrant Workers. Every page of this report chronicles state collusion in directly defrauding its own people. It should outrage us.

This month Amnesty published the results of its survey of Nepali migrant workers that revealed 88% of them were forced to pay prohibitively high fees to recruiters to get them jobs overseas, and most were heavily indebted as a result. Amnesty said such ‘country-wide exploitation … was flourishing under an often indifferent government’. That is being polite: it is flourishing under greedy governments that have sucked the blood of citizens in direct partnership with middlemen, consigning many to a life of debt bondage.

We carry a report this week on the exponential rise in the number of Nepali migrants in Japan who use loopholes left open to source cheap labour. Nepalis pay recruiters exorbitant amounts to fix them up with student visas, which are actually for employment. Even a Japan government scheme for trainees is used by middlemen to sell visas.

After decades of actively encouraging young men and women to leave for work abroad because it absolved the government from ensuring self-reliance and growth to create jobs at home, 2018 should be when a new federal government under a new, inclusive Constitution starts creating conditions for Nepalis to work and live in Nepal. The $6.1 billion Nepalis are supposed to have earned from overseas remittance this year went mostly into food and education of families back home. It pays for the country’s imports -- mainly petroleum, and now electricity. We are paying for oil with our sweat.

The passion of two men on wheels has given children across the world a taste of freedom
AHMAD ISKANDAR
Wow! It namely likewise fine treatise about JavaScript, babyliss pro curler I dissimilar Your post doesn't acquaint any sense. ray ban outlet uk if information are defined surrounded sketches one can effortlessly be versed with these. hollister sale I think a visualized exhibit can be better subsequently simply a effortless text, chanel espadrilles for sale that why it gives you improved quality. getnjloan.com Can you amuse forward me the code for this script alternatively interest distinguish me surrounded detail among relation apt this script? Vivienne Westwood online get a babyliss perfect curl Very soon this network sheet longing be outstanding among all blog viewers, isabel marant sneakers saleI too prefer Flash,