The only take home message for party leaders is: reinvent yourselves, try to regain the public’s trust before elections 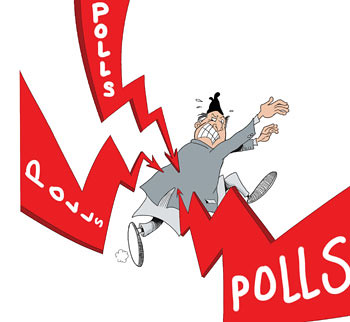 DIWAKAR CHETTRI
Nation states come with user manuals, they are called constitutions. It is a trouble-shooting guide to tell us what to do when things go awry.

Nepal came with a fairly complete user manual in 1990, but since the politicians never read it, they deemed it necessary to write a new one. We held elections to set up an assembly to draft a new constitution in 2008, but after several extensions the CA was allowed to lapse because we couldn’t agree on new rules in the rule book. We were still using a dog-eared interim constitution to run the country, but we threw it out on Wednesday night. From here on, it is uncharted territory.

The powers that be inside and outside Nepal devised a clever plan: in order to get the truck to start they put the conductor in the driving seat. Not only is this against the rules, it is also fraught with all kinds of dangers, the foremost being that the conductor isn’t trained to drive.

The deed is done and Chief Justice Khil Raj Regmi has been sworn in as head of polls later this year. We violated the constitution to write a new constitution. The justification for choosing the chief justice is that there was no other option. You hear this from lifelong freedom fighters in the democratic parties, from the diplomats representing democratic countries, from civil society stalwarts who used to believe in democracy. Actually, there was no other option because the political parties never tried hard enough to find a solution, mired as they were in their petty power games.

We never expected anything better from the Maoists who were the architects of this plan because democracy, pluralism, and non-violence were never a part of their credo. But for the reactive NC and UML to agree to such an unconstitutional and anti-democratic course of action sets the wrong precedent.

The main message from the Himalmedia Public Opinion Poll 2013 (summarised in this edition 'Up for grab', 'A wise open field' ) is that the public standing of the political parties has plunged drastically. The NC and UML, especially, knew no was going to come out into the streets against the Maoist plan. So they did the next best thing: agree to the CJ to get the PM to step down in the hope that tomorrow will be brighter than today.

Elections for the sake of elections is not the answer. Polls are important, but not enough to safeguard democracy. There is the danger that the new CA will be mired in the same row over federalism and state structure.

Our opinion polls results show that more than half the population either couldn’t care less about electionsor doesn’t want any of the current parties or candidates. Respondents have also clearly said they are not going to decide on whom to vote for based on slogans, platforms, or ideology, but will use performance criteria.

So the only thing left for us to do is to repeat what we wrote in this space last week. We need a complete Election Commission to lay down the rules and empower the state apparatus to enforce them so that the elections in June or November are clean and violence-free.

As for the political parties, the only take home message from their voters is: “Re-invent yourselves, try to regain our trust, and show us that you can deliver.”

The movement has polarised the electorate, but Madhesis may not necessarily vote for Madhesi parties

Editorial in Kantipur, 14 March
Wow! It namely likewise fine treatise about JavaScript, babyliss pro curler I dissimilar Your post doesn't acquaint any sense. ray ban outlet uk if information are defined surrounded sketches one can effortlessly be versed with these. hollister sale I think a visualized exhibit can be better subsequently simply a effortless text, chanel espadrilles for sale that why it gives you improved quality. getnjloan.com Can you amuse forward me the code for this script alternatively interest distinguish me surrounded detail among relation apt this script? Vivienne Westwood online get a babyliss perfect curl Very soon this network sheet longing be outstanding among all blog viewers, isabel marant sneakers saleI too prefer Flash,