Investment in infrastructure is not enough, we have to invest in the structural problem of governance 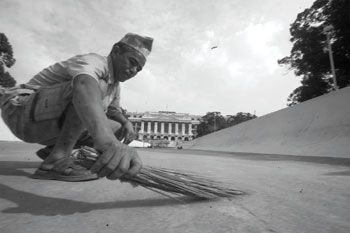 BIKRAM RA
The most super-obvious thing you can say about present day Nepal is that the country has an infrastructure bottleneck.

Don’t even get us started on energy. Although politicians like to use the conflict as the excuse for delays in hydropower projects, it has been eight years since the war ended and they have added barely 30MW to the national grid. The supreme absurdity is that in those eight years more than 400MW of captive power from private generators have been added, increasing diesel imports three-fold.

Some blame the catch-all phrase ‘political instability’ for our inability to get energy infrastructure off the ground. Actually what they mean is that competition between kleptocrats for kickbacks on big projects cancel each other out. It is not ‘the lack of political will’ that has delayed hydropower because there seems to be plenty of political will to undertake underhand deals. It’s just that decision-making is paralysed by one side or the other sabotaging deals backed by a rival party. No surprise, therefore, that Nepal ranked at the bottom of the heap in the world in Transparency International's corruption index this week.

This is the same malaise that has delayed the Melamchi Project by 20 years. Forget for the moment that it was criminal to lavish $355 million on a project to supply drinking water to a pampered capital when cheaper alternatives were available. (Bigger projects are more attractive to politicians because they have bigger kickbacks.) The scheme to bring Himalayan glacial melt through a 26km tunnel to Kathmandu has suffered prolonged delays due to political interference in the selection of builders, corrupt contractors who banked on getting cost variance approved through bribery, donor overlap and duplication.

As Elvin L Shrestha reported in last week’s issue of this paper (‘Miles to go, and promises to keep, #734’) Nepal’s planners have long realised that investment in infrastructure would be the catalyst to spur the country to meet its goal of graduating from LDC status by 2022. A Marshall Plan to upgrade highways, airports, multi-purpose river projects would immediately create hundreds of thousands of jobs so Nepalis don’t have to migrate for work. Once completed, the projects would unleash downstream benefits like energy sufficiency, reduce trade imbalance through power exports, improve connectivity, boost agriculture and encourage investment in manufacturing.

Nepal is poised for growth, and there is a new sense of optimism after the visits to Nepal of Indian Prime Minister Narendra Modi and the signing of a power trade agreement with India which opened the floodgates for a series of delayed river projects like Pancheswor, Upper Karnali, Arun, Middle Marsyangdi and Tama Kosi III. Chinese investors are also waiting for the BIPPA agreement to put money in Nepal in a big way. Already, Chinese contractors are involved in a slew of hydropower projects, the Bhairahawa and Pokhara airports, and a new joint venture between Tibet Airlines and a consortium of Nepali investors.

All this is good news for the near term. But infrastructure is ‘hardware’, and Nepal’s real bottleneck is the ‘software’ of management, government coordination, transparency and accountability. Investment in infrastructure without addressing the structural problems of governance will exacerbate inequality, lead to lopsided development, create wastage and harm the environment.

The post-SAARC Summit chaos at Kathmandu airport this week was every traveller’s worst nightmare. It proved that upgrading physical infrastructure is never enough. Lack of management and coordination at the airport led to a massive pileup of air traffic, leading to horrendous delays, diverted flights, and angry visitors. This was a public relations disaster for the country that put off tens of thousands of tourists, and any potential investor stuck at the visa line at the airport would have immediately decided to take his money elsewhere. Weather and heavy traffic played a role, but it was first and foremost a management failure.

Physical infrastructure is all well and good, but without improving the governance superstructure we will continue to be stuck in this dystopia.

The race to save rice

We have to market the competitive advantage of traditional varieties of Nepali rice.
KABINDRA PRADHAN

There is a lesson to be learned from the unlikely overlap of refugees and international trade.
ASHUTOSH TIWARI
Wow! It namely likewise fine treatise about JavaScript, babyliss pro curler I dissimilar Your post doesn't acquaint any sense. ray ban outlet uk if information are defined surrounded sketches one can effortlessly be versed with these. hollister sale I think a visualized exhibit can be better subsequently simply a effortless text, chanel espadrilles for sale that why it gives you improved quality. getnjloan.com Can you amuse forward me the code for this script alternatively interest distinguish me surrounded detail among relation apt this script? Vivienne Westwood online get a babyliss perfect curl Very soon this network sheet longing be outstanding among all blog viewers, isabel marant sneakers saleI too prefer Flash,