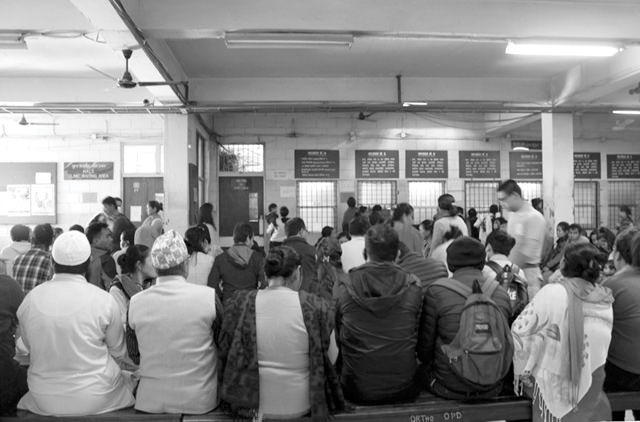 An investigative story about the national health insurance plan of the government in last week’s edition of this paper generated a lot of debate. The Act was pushed through Parliament by former Health Minister Gagan Thapa as one of its last pieces of legislation before it was dissolved (see article he co-authored, below), and it immediately got a chorus of welcome as a first step in ensuring affordable and accessible health care for all Nepalis.

We agree that it was a step forward after many decades of dilly-dallying by successive governments. The need for universal health care is great at a time when government hospitals continue to be under-funded and over-burdened, and private institutions are so commercialised that they are out of reach of the majority of Nepalis. Filling the gap are PPP models like Patan and Dhulikhel community hospitals, Bayalpata in Achham run by Possible Nyaya Health, the hospitals supported by the United Mission to Nepal, and the dozen or so district hospitals that are back-stopped by the Nick Simons Institute.

At a time when Nepal’s disease burden is shifting from infectious to non-communicable, and highway accidents have become a major cause of mortality, the country’s health response also has to change from the preventive to curative. Evidence suggests that the poor are even more susceptible to chronic diseases, but they are financially much less able to absorb the costs of care. Indeed, as our report showed, even middle-class Nepalis have been pushed into poverty because of the unforeseen medical bills of family members.

Nepal needs a much more robust and egalitarian medical system, one that does not downgrade the quality of care provided by private hospitals, while upgrading the capacity of rural government hospitals – and providing it at minimal or no cost to the patient.

The new national insurance Act requires citizens to pay an annual premium of Rs2,500 per family. That entitles a five-member family to reimbursement of medical bills up to Rs50,000 annually. There are subsidies for the poor, elderly and disabled. The insurance payout is too little: our coverage last week cited the example of a patient from Gorkha suffering from intestinal obstruction who had already spent Rs67,000 at a community hospital even before treatment started. The 50,000 also doesn’t cover cost of transport to a private city hospital for patient and accompanying family members. Given Nepal’s corruption-ridden system, the scheme throws such insurance payments wide open to collusion and malpractice.

A much cheaper and cleaner solution may be for the government to increase its health outlay for district hospitals so that most patients can be treated near their homes. Medical care would then be free at the point of care, facilities would improve at rural hospitals, and the responsibility for medical treatment would be devolved to newly-elected provincial or municipal governments. Only serious cases would then have to be referred to private city hospitals.

Rural hospitals can sign development impact bonds to meet targets to be eligible for grants, and be reimbursed under a formula shared by the risk-bearer investor and outcome funder. National health insurance as currently envisaged could allow rural government hospitals to stagnate further, force patients to travel to cities even for minor operations at great expense for which they would not be entitled to insurance claims.

Policies for the people, Marty Logan

Ensuring insurance for all

Nepal’s historic passage of the National Health Insurance Act by Parliament last month adds the nation to the list of countries with a solid national health insurance foundation. Since the passage of the National Health Policy of 1991, Nepal has seen real gains in primary care, even through the subsequent decade of civil war. During this time, the private sector’s growth dramatically outpaced the public sector’s, resulting in a large increase in out-of-pocket expenditures on health that generally confer significant social costs because already scarce household funds for education and other livelihood investments were diverged to pay for health care expenses.

Today, Nepal’s US$16 per capita per year public-sector spending on health lags far behind projections needed to meet the Sustainable Development Goals. A recent study by Lancet Global Health found that such spending needs to exceed US$100 by 2030.

The National Health Insurance Act has the following features:

1. All citizens must enrol to allow for risk pooling, equity and a broader political notion of an entire nation being behind a shared, public good.

2. There are modest out-of-pocket premiums, subsidised for the poor, disabled, and elderly.

3. It introduces a payer-provider split for the first time in the country’s history, replacing the central government.

4. The head of the insurance board is nominated by cabinet and independent from the ministry of health. Both public and private providers that receive reimbursements will then be independently managed from the insurer.

5. Reimbursement for in-patient care includes payments based upon diagnostic groups linked to quality instead of strictly volume of diagnostics performed or treatments dispensed.

Hopefully the new Act will lay the groundwork for future policies aimed at regulating health care on the basis of outcomes, quality and cost efficiency. Nepal will need to rapidly digitise on a common electronic health record (EHR) platform. The open-source platform OpenMRS it is now using in two public hospitals could be the basis for a national EHR system.

Nepal will also have to innovate delivery of longitudinal care across the lifetimes of citizens in both homes and communities, and move away from the dominant paradigm of reactive acute care. The country can leverage its rich history of community-based, preventive care delivery.

The final key innovation will be creating operational definitions of quality and an institutional framework to enforce it. Already, Nepal is moving forward with the National Health Institution Quality Authority Act, which would introduce accreditation and oversight of quality. Nepal is well-positioned to help deliver new ideas and solutions.

Gagan Thapa is a former Minister of Health. Amit Aryal is a health policy adviser based in Kathmandu. Duncan Maru is an assistant professor at Harvard Medical School, and co-founder of the Nepal-based nonprofit, Possible.

A longer version of this piece appeared in Health Affairs.

Do hospitals have to be so expensive, ELIPHA PRADHANANGA

Handshakes are more egalitarian than namastes

Defaulters are defaulters and should be called defaulters
ARTHA BEED
Wow! It namely likewise fine treatise about JavaScript, babyliss pro curler I dissimilar Your post doesn't acquaint any sense. ray ban outlet uk if information are defined surrounded sketches one can effortlessly be versed with these. hollister sale I think a visualized exhibit can be better subsequently simply a effortless text, chanel espadrilles for sale that why it gives you improved quality. getnjloan.com Can you amuse forward me the code for this script alternatively interest distinguish me surrounded detail among relation apt this script? Vivienne Westwood online get a babyliss perfect curl Very soon this network sheet longing be outstanding among all blog viewers, isabel marant sneakers saleI too prefer Flash,