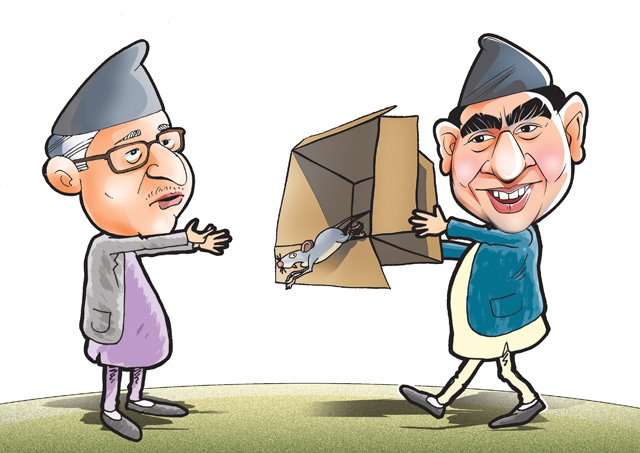 For Nepalis, the past week has been historic at many levels. The prolonged 11-year peace process that followed the conflict has finally, and officially, ended with the swearing in of a newly-elected national government under the new Constitution.

The federal structure of the state has now also taken final shape: elected local governments have been in place for six months, provincial assemblies are in place and seven chief ministers have assumed office.

The current juncture is also historic because two of Nepal’s biggest fragmented communists have united to form the Nepal Communist Party. The fact that two ideological rivals, one of whom was actively killing members of the other, have decided to unite is no mean feat given the proclivity of Nepal’s parties to split every chance they get.

It has been five months since the Maoists and the UML made the surprise announcement that they were setting up an electoral alliance with the aim of ultimately uniting the party. Many scoffed at the idea, saying it was most unlikely. After the left alliance swept all three tiers of elections, however, everyone sat up to take notice. UML and Maoist leaders themselves appeared to have been emboldened by the victory.

Negotiations between K P Oli and Pushpa Kamal Dahal, however, were not easy. The knotty question was how to accommodate the UML’s People’s Multiparty Democracy line espoused by Madan Bhandari, with the doctrine of armed struggle of the Maoists.

The differences between hirsute European gentlemen like Karl Marx, Friedrich Engels and Vladimir Lenin on the one hand, and Mao Zedong prompted comrades from both parties to hold their ground till the very end.

The UML and the Maoists today are both parties of crony capitalists and the ‘line’ was not so important anymore. The two leaders agreed to become co-chairs of the united party, and Dahal revealed on Tuesday in Chitwan that he was not claiming a rotational prime ministership after 2.5 years.

Whether this was out of a genuine sense of compromise, or because of Dahal’s unspoken belief that Oli may not even be able to complete his term is now moot. The fact is that together the NCP now dominates local, provincial and federal assemblies with nearly two-thirds majority.

The real question now is what the party does with that strength. History has given Oli and Dahal an opportunity to turn government into good governance through accountability. The comfortable majority should make the future parliament and government fairly stable, reduce horse-trading and frequent changes in leadership.

The communist duo have also shown considerable political agility and pragmatism by forging this alliance, and the people will now be watching expectantly whether they deliver on their electoral promise of stability and prosperity. Whether this means the ‘stability’ of Malaysia, Singapore or China is what we have to be vigilant about. Nepal’s history is replete with examples of the temporary stability that autocracies bring.

Five years may seem like a long time, but at the pace things move in Nepal, it is barely enough time to play catch up. Oli has a long to-do list to make up for accumulated neglect of the past decades. We list ten tips for him below in order of priority:

Ensure genuine devolution of power to provincial and local governments so that they can speed up development and service delivery.

Tackle corruption, plunder and extortion by rent-seeking rulers hand-in-glove with greedy contractors and the mafia.

Elections are over, Oli doesn’t need to bait India anymore, but balance geopolitical relations and rope in neighbours in the development process.

The treasury has been emptied by the previous government through lavish handouts. Ensure fiscal discipline.

Strengthen the rule of law.

Prime Minister Oli has often said that he wants to use the ‘bonus life’ after his kidney transplant to raise the living standards of Nepalis. “There is no reason for me to be greedy, I will uphold my personal integrity as well as that of my government,” he has said.

Having a prime minister who wants accountability so that he can leave a legacy of socio-economic progress is already a big leap forward for Nepal. Now, all we need to see are results.

The rise of the red, Om Astha Rai

Home thoughts from an election in Finland
SHIVA GAUNLE

Its possible to build a South Asian identity, but it wont happen at SAARC summits
CK LAL
Wow! It namely likewise fine treatise about JavaScript, babyliss pro curler I dissimilar Your post doesn't acquaint any sense. ray ban outlet uk if information are defined surrounded sketches one can effortlessly be versed with these. hollister sale I think a visualized exhibit can be better subsequently simply a effortless text, chanel espadrilles for sale that why it gives you improved quality. getnjloan.com Can you amuse forward me the code for this script alternatively interest distinguish me surrounded detail among relation apt this script? Vivienne Westwood online get a babyliss perfect curl Very soon this network sheet longing be outstanding among all blog viewers, isabel marant sneakers saleI too prefer Flash,