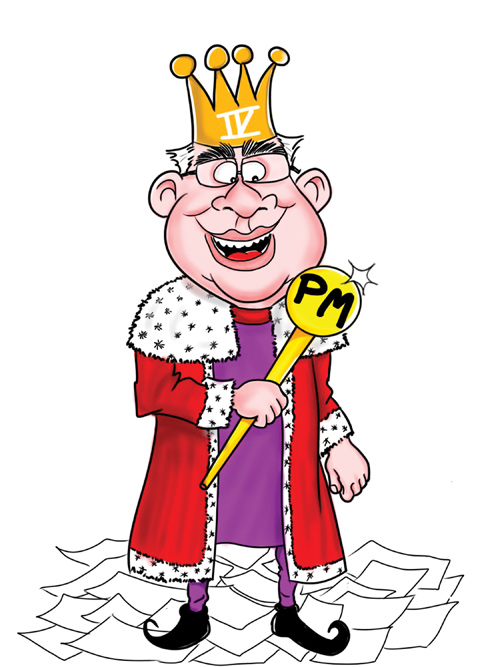 Ever since the 18th century, a basic tenet of democracy has been the doctrine of the separation of powers. The functions of the three branches of government (legislature, executive and judicial) are delineated so that they don’t step on each other’s toes. The aim is to have checks and balances and avoid the concentration of power in any one branch. Sometimes, we in the media are called the ‘fourth estate’ as another layer of scrutiny to defend the citizen’s constitutionally guaranteed right to information.

Nepal’s political evolution generally after the 1990 People’s Movement, and in particular after the conflict ended in 2006, has seen the lines deliberately blurred between the branches of government -- along with blatant political interference into constitutional organs. It has now become so common for one branch of the state to interfere in another that it doesn’t even raise eye-brows anymore. Our greedy and semi-literate rulers are directly responsible for the steady erosion of pluralism, a constriction of freedoms and democratic decay. It is a basic trait of Nepal’s democratic parties that they fight long and hard for an open society with great personal sacrifice, courageously standing up again and again to dictators, endure incarceration, and then they go and repeatedly squander hard-won freedoms.

What we see in Nepal today is not a separation, but a fusion of powers. Most recently, it started with the appointment of Chief Justice Khil Raj Regmi as caretaker prime minister to oversee elections in 2013. That fatal foray into mixing up branches of government led to even more objectionable appointments, like that of a royal bureaucrat indicted for embezzlement and suppression of the pro-democracy movement of 2006 as the anti-corruption czar.

Since the end of the conflict, the Big Three parties have behaved like a political cartel, exploiting the democratic void to plunder local budgets and divide up the spoils of office. The Executive has essentially captured the Legislature and ruled it by whipping up proxies. Politicians got Parliament to register an impeachment motion against the CIAA chief last year not for his extortion and abuse of power, but because they suddenly became suspicious of his political ambitions. Then, last month the Maoist-NC coalition got its MPs to file an impeachment motion against Chief Justice Sushila Karki before she retired, just so that she would not be able to hear the IGP sacking case, and high-profile corruption cases against their cronies.

Chief Justice Karki has spilled the beans in a scathing interview (translation on page 13) in which she accuses Prime Minister Dahal of pressuring her on sub judice cases. The latest most egregious interference was the Maoist-NC arm-twisting of the Election Commission to order a re-poll in Ward 19 of Bharatpur even after Maoist cadre tore up ballot papers after they started trailing.

All this does not bode well for the future of Nepal’s democracy, as Prime Minister Deuba takes over for the fourth time with old wine in an old bottle.

safeguarding ever drop of clean water
PETER GLEICK
Wow! It namely likewise fine treatise about JavaScript, babyliss pro curler I dissimilar Your post doesn't acquaint any sense. ray ban outlet uk if information are defined surrounded sketches one can effortlessly be versed with these. hollister sale I think a visualized exhibit can be better subsequently simply a effortless text, chanel espadrilles for sale that why it gives you improved quality. getnjloan.com Can you amuse forward me the code for this script alternatively interest distinguish me surrounded detail among relation apt this script? Vivienne Westwood online get a babyliss perfect curl Very soon this network sheet longing be outstanding among all blog viewers, isabel marant sneakers saleI too prefer Flash,