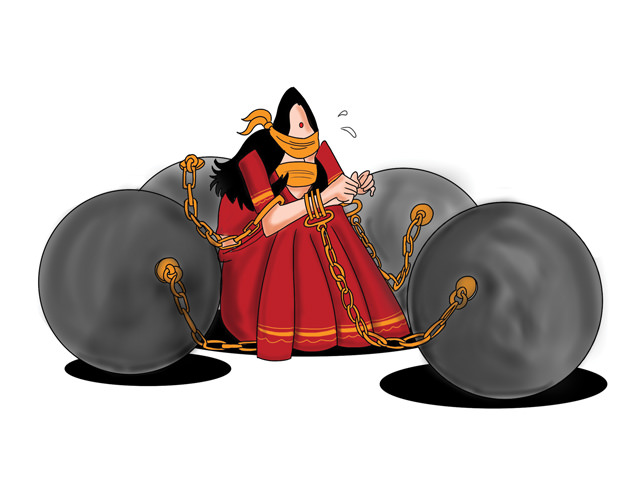 It is an accepted truism that the best return on investment in development expenditure is when money is spent educating girls. Indeed, the main reason Nepal made dramatic progress in improving mother-child survival, or achieving a rapid decline in the total fertility rate were because of the doubling of the female literacy rate in the past 20 years. All this has happened despite having wasted two decades in a ruinous war, poor governance, and unconscionable corruption in service delivery to the neediest.

Now, as we embark on a hopefully new era of devolution and accountable politics, Nepal is facing a slew of second-generation problems: a persistently high dropout rate for girls at Grade 5, the high rate of neo-natal mortality, age of marriage for women that hasn't shown expected improvement, or very low participation of women in decision-making positions despite affirmative action clauses in the new Constitution.

There are also worrying signs in Nepali society of an increase in domestic violence, rape, and abuse of women. In fact, there appears to be an indirect causal link between the rise in female literacy rate and incidence of domestic violence. It is as if while education has empowered girls, given them more confidence, made them more outspoken and independent, the boys have not changed. They haven't been able to handle more assertive female family members, or young wives. The rise in literacy rate, therefore, hasn’t made much of an impact on Nepal’s entrenched patriarchal culture -- in fact it seems to have ingrained conservative values.

It seems to us that time has come to promote interventions in education systems that doesn’t just prioritise improving enrolment rates, but also in making the school curriculum more gender sensitive. The still predominantly-male teachers in the school system need to be trained and be made aware, so they behave in a manner that is sensitive to gender equality issues. In short, the solution to gender justice may lie in empowering boys.

Socialisation of Nepali boys and the cultural cues they pick up as they grow reinforces gender stereotypes, embeds their sense of entitlement, emboldens actions derived from power relations, and further embeds prevalent patriarchal norms. In short, the malaise is male.

As Election Commissioner Ila Sharma eloquently argues in her Guest Editorial it is now time to focus on boys and men. Despite an inclusive Constitution, we have seen that the participation of women is still token and ceremonial. The new Cabinet may have just two women out of 17 if we are lucky. It is shameful the way male- and caste-dominated bureaucracy still treats women and minorities. Citizenship laws that discriminate against the offspring of single mothers is a glaring national offence and needs to be urgently set right. Victims of wartime rape have been denied compensation and justice by the he-state.

Despite a repressive political structure and a societal system stacked against them, there are many Nepali women who have risen up through the dint of hard work and determination. We present some examples in our special coverage in this issue to mark the International Women's Day on 8 March with this year's theme: #PressForProgress.

'No country for women', Shreejana Shrestha

Autumn of the patriarchy

US Ambassador Michael Malinowski is an old Nepal hand, having first served here in 1991. He spoke to Nepali Times this week on a wide range of issues. Excerpts:

The Ozzies are back

The Australian Film Roadshow is back in Kathmandu this weekend.
SRADDHA BASNYAT
Wow! It namely likewise fine treatise about JavaScript, babyliss pro curler I dissimilar Your post doesn't acquaint any sense. ray ban outlet uk if information are defined surrounded sketches one can effortlessly be versed with these. hollister sale I think a visualized exhibit can be better subsequently simply a effortless text, chanel espadrilles for sale that why it gives you improved quality. getnjloan.com Can you amuse forward me the code for this script alternatively interest distinguish me surrounded detail among relation apt this script? Vivienne Westwood online get a babyliss perfect curl Very soon this network sheet longing be outstanding among all blog viewers, isabel marant sneakers saleI too prefer Flash,