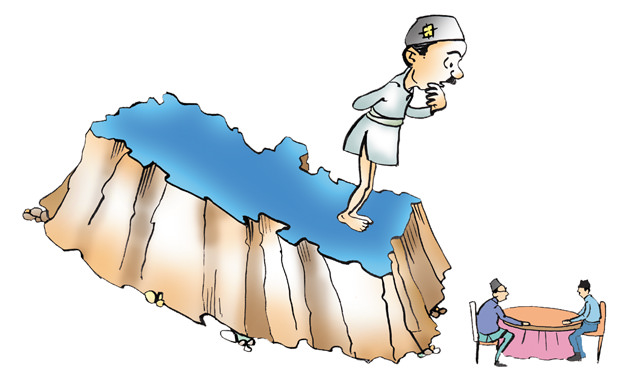 When political leaders are completely discredited, when their parties are ideologically and morally bankrupt, when people have stopped expecting anything from them, they turn into dream factories.

That is exactly what has happened to Nepal’s three-party cartel in the run-up to forthcoming provincial and parliamentary elections. Their campaign manifestos are so hyperbolic they are an indication that, a) they are out of touch with reality, b) they don’t care what people think because they have other means to garner votes, c) they have learnt nothing from the last 27 years of governance failure and are still treating the Nepali people like sheep.

The election declarations of the main parties would be hilarious if they were not proof of hallucination. The UML-Maoist left alliance says it will raise Nepal’s per capita GDP from the current $760 to $5,000 within five years – a feat that would require an annual economic growth rate of 20%.

Not to be outdone, the Nepali Congress wants the economy to be worth Rs50 trillion in the same period, which would require the economy to grow at 13%. Nepal’s sharpest annual growth rate over the past 27 years has been a mere 7%.

There is no harm in dreaming big, but even dreams have to be realistic. Baburam Bhattarai’s New Force Party, which is struggling to convince the bigger parties to allow it to hang on to their coat-tails, wants to eradicate mass poverty in five years. When 500,000 young Nepalis enter the job market every year, and there are over 4 million working abroad, the NC vows to provide a guaranteed job to all Nepalis during its tenure. The left alliance claims to be able to ensure at least one employed person in each household. These parties may as well promise to distribute cash handouts to all 29 million Nepalis.

Warming up to the subject, the left alliance wants to make the country self-sufficient in meat, poultry and dairy products, while the NC promises Nepal will not have to import vegetables within five years. Neither party has any concrete plans about how to go about doing this, and cannot explaion why they didn’t do it in the past 27 years.

The promises about infrastructure are even more outlandish, as each party tries to outdo the other with wild ideas like east-west bullet trains, monorails, metros and trams for Kathmandu. The New Force even wants to connect Kathmandu to the bast of Mt Everest with cable cars, and build eight new international airports in five years. (Pokhara’s international airport has not got started after 30 years.) If elected, all three parties vow to start digging for uranium, drilling for crude oil and mining iron ore.

The parties know that no one reads their manifestos, and even if they did no one would believe them anyway. It has become so customary for political parties to lie and not keep promises that they think this is absolutely normal.

Having no ideological differences, and because they have squandered the people’s trust by nominating gangsters, the election campaign has now degenerated into mud-slinging and personal attacks. The so-called ‘left’ alliance (made up of crony communists) and the so-called ‘centrist’ NC (crony capitalists) have now converged to such an extent that it is impossible to tell the difference between Comrade Napoleon and Farmer Jones.