We doubt the zero-cost agreement between Qatar and Nepal this week will come into force because there is too much money to be made on the blood, sweat and tears of Nepali workers by the politically-connected manpower mafia. 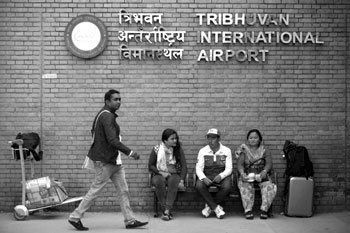 GOPEN RAI
For a country that is so dependent on overseas contract workers, the Nepali state seems to be capable of neither protecting its citizens abroad nor maximising the benefits of remittances to the national economy. This is a disgraceful and outrageous lapse, but not surprising given the political disarray and absence of accountability among elected officials.

Eighteen per cent of Nepal’s population of 30 million at any given time is working abroad. Half of them are seasonal migrants in India, and no one keeps any records of where they go after crossing the open border, what jobs they have or how much money they send home. Which is why the national discourse on overseas labour is dominated by the estimated 2 million who are in the Gulf, Malaysia, Korea and Japan.

They send home more than $4 billion a year, and remittances now make up a third of the country’s GDP. Without this safety valve, joblessness among youth would probably have led to even greater political chaos and instability than we have now.

Yet, the shabby way we treat the 2,500 Nepalis leaving for work and returning to Kathmandu airport every day is proof that the worst enemy of Nepali workers are Nepalis themselves. Instead of declaring them national heroes, they are fleeced, cheated, extorted, harassed, and abused by officials, security personnel every step of the way.

Which is why we welcome the zero-fee agreement signed this week between a visiting Qatari delegation led by Labour Minister Abdullah Bin Saleh Mubarak Al-Khulaifi and Nepal’s State Minister for Labour Tek Bahadur Gurung. As Om Astha Rai reports, this is not the first time such an agreement has been signed, so the hope is that this agreement will be enforced strictly.

Four years ago, President Ram Baran Yadav and Prime Minister Baburam Bhattarai visited Doha separately, and met Qatari officials. Both interacted with Nepali workers and heard firsthand that the real problem was exploitation by fellow Nepali recruiters back home. The statistics are revealing: one in every five persons in Qatar today is a Nepali, and Nepalis are deported from Doha airport every day because they have been duped with fake papers.

Every year more than 200 Nepalis come home in coffins from Doha alone, half of them have succumbed to Sudden Death Syndrome, but their families do not get compensation because they did not die at the ‘work site’.

After joining their jobs, most have to work many months just paying back recruiter’s commission fees. When they do get their salaries, they are paid much less than what is stipulated in the contract. The Kafala system bonds Nepalis to their Qatari employers and puts them at their mercy.

The agreement this week seems to have been prompted not so much by political will in Kathmandu, but the international criticism that Qatar is facing ahead of the 2020 Football World Cup about the treatment of overseas workers there.

The zero-cost rule is not new. Qatar and Nepal signed a similar agreement in 2005 under which Nepali migrant workers don’t have to bear the cost of air tickets, visa fees and other charges. But everyone was making so much money on the blood, sweat and tears of migrant workers that the agreement was never implemented.

Qatari employers are required to pay a facilitation fee of $260 per worker, which the recruiting agency in Doha and its counterpart in Kathmandu divide up between them. Despite this, Nepali manpower companies charge the workers Rs 100,000 just for finding them a job. On top of this, although the 2005 bilateral agreement stipulates that the Qatari employer is supposed to foot the air ticket and visa fees, Nepali recruiters still ask the workers to pay for this. Now, both ministers have agreed to take action ‘within two weeks’ against recruiting agencies in both countries. There are more than 700 recruitment agencies in Kathmandu sending workers to Qatar, and there are 250 in Doha that hire Nepali workers.

Labour rights activists we interviewed doubt that the zero-cost migration deal will ever come into force because most Nepali manpower agencies have political protection who benefit from perpetuating the status quo.

State Minister Gurung himself is from the NC Deuba panel and his family owns a recruitment company. Enough said.

Drishti, 27 July
Wow! It namely likewise fine treatise about JavaScript, babyliss pro curler I dissimilar Your post doesn't acquaint any sense. ray ban outlet uk if information are defined surrounded sketches one can effortlessly be versed with these. hollister sale I think a visualized exhibit can be better subsequently simply a effortless text, chanel espadrilles for sale that why it gives you improved quality. getnjloan.com Can you amuse forward me the code for this script alternatively interest distinguish me surrounded detail among relation apt this script? Vivienne Westwood online get a babyliss perfect curl Very soon this network sheet longing be outstanding among all blog viewers, isabel marant sneakers saleI too prefer Flash,