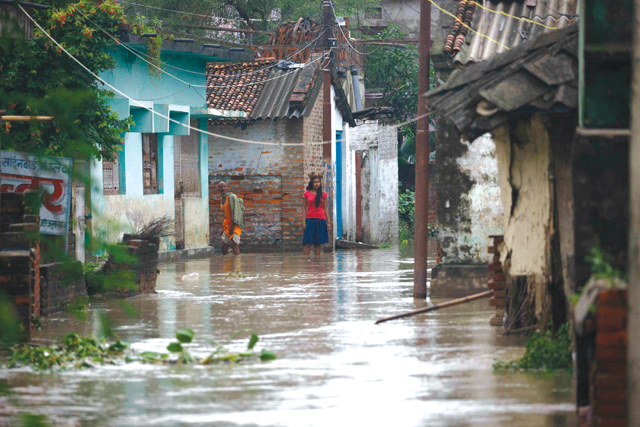 What is surprising about this week’s floods is that we seem so surprised by them. Nepal is prone to water-induced disasters, and after the 1993 catastrophe the Japanese even helped set up a government department for early-warning and management of floods. Yet floods continue to ‘wreak havoc.'

We also like to call floods ‘natural disasters.' They are ‘natural’ only in as much as they are caused by heavy rain. This annual monsoon phenomenon is actually man-made, or at least exacerbated by poorly-planned infrastructure. There is a human cost to floods mainly because we tamper with the natural flow of rivers, damage the watershed and obstruct drainage.

Farmers have long known that floods are actually beneficial because they bring down nutrients and replenish the soil, and they have learnt to live with them. The situation has only become unmanageable because we have constricted rivers with flood ‘control’ levees to ‘tame’ them.

Floodplains over which rivers once spread to accommodate excess runoff are now built over. Deforestation of the fragile Chure hills directly upstream from the Tarai has resulted in rivers being choked with sediment, causing them to meander through villages and farms. A river will find its own way to the sea no matter what we do to block its path. We have turned a predictable annual occurrence into a calamity.

It is true that floods are getting more destructive. The monsoons are getting more erratic, and cloudbursts are more common. But even this is man-made because the changes in weather patterns appear to be caused by climate change.

Most flood damage in the Nepal Tarai and India this year was not caused by Nepal’s four main Himalayan rivers but by flash floods on streams that flow down from the Chure. The waters rampaged through the Tarai and in some places were blocked by road embankments on the Indian side. The irony of it all is that the Chure was mined for gravel and sand to feed India’s infrastructure boom, an act that has made floods more destructive in India itself.

The Kosi Barrage is a ticking time bomb, not so much for Nepal, but for Bihar. The weir and the dykes downstream were a political and engineering folly because they allowed the Kosi’s sediment to raise the river’s bed so it is now flowing several metres above the surrounding terrain. A more serious breach in the levees, as happened in 2008, or a future flash flood, could make the Kosi bypass the barrage altogether with destruction of biblical proportions.

Floods and landslides will only get worse in Nepal in coming decades, that much is sure. Preventing them requires understanding nature’s ways, and letting rivers flow free again.

Madhesi extremists must not be given free rein
PRASHANT JHA

Mainly in the plains

Is it too much to expect Kathmandus rulers to take madhesi grievances seriously?
PRASHANT JHA
Wow! It namely likewise fine treatise about JavaScript, babyliss pro curler I dissimilar Your post doesn't acquaint any sense. ray ban outlet uk if information are defined surrounded sketches one can effortlessly be versed with these. hollister sale I think a visualized exhibit can be better subsequently simply a effortless text, chanel espadrilles for sale that why it gives you improved quality. getnjloan.com Can you amuse forward me the code for this script alternatively interest distinguish me surrounded detail among relation apt this script? Vivienne Westwood online get a babyliss perfect curl Very soon this network sheet longing be outstanding among all blog viewers, isabel marant sneakers saleI too prefer Flash,