That famous Maoist dictum has a whole new meaning in post-earthquake Nepal, and not quite in the way Pushpa Kamal Dahal intended. 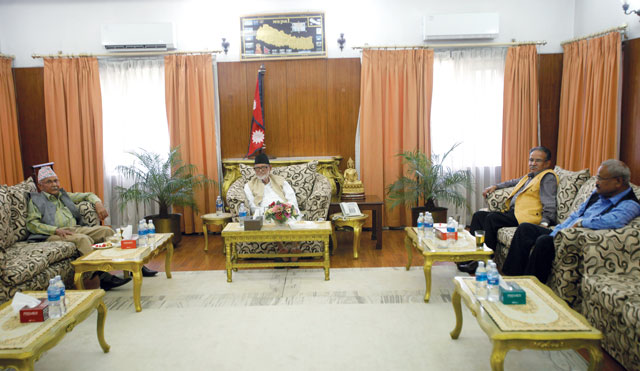 Nine years after the end of the conflict and seven years after the first election to an assembly tasked with drafting a new constitution, the four main political parties finally came to an agreement late Monday night on the last pending element of the peace process.

Ostensibly, the deal involved a compromise on an 8-province model for Nepal’s future federal structure. If it was simple as that, the great wonder is why it took so long for them to hit upon that formula. Which means it was never only about the constitution, but about getting to power, controlling state resources, and taking all the credit.

This week’s nocturnal compromise involved the NC-UML giving up its stand on six territorially-designated provinces, and the Maoist-Madhesi alliance letting go of its insistence that eight future provinces be ethnically demarcated conclaves. They met half-way to allow a commission to decide on boundaries and future federal legislatures and also how to name themselves. It is disingenuous that they have bargained as if it was a fish market about an arbitrary number for provinces without figuring out what those provinces are going to look like or what they are going to be called. However, it was probably the only compromise possible at the present time.

In a sense, what the four parties cunningly did was pass the buck on the remaining sticking points on the constitution to someone else somewhere to resolve later. It is the tragedy of Nepal that it needs a major disaster or a violent street uprising to shake things up. This time the ruse of the need for a national unity government for reconstruction injected a sense of urgency that removed the impasse on power-sharing.

All four main political parties got what they wanted from the deal. The NC and the UML had a gentlemen’s agreement that Prime Minister Sushil Koirala would make way for the UML’s KP Oli as soon as the constitution was agreed upon.

The ailing Oli was impatient to become prime minister, but for that Koirala had to step down which required the constitution to be passed first.  Koirala needed a graceful way to step down, and wanted to bequeath a historical legacy to bolster his stature at the upcoming party conclave. “Let’s go for eight, then,” a downcast and evasive Koirala is supposed to have said at the four-party meeting on Tuesday morning.

Pushpa Kamal Dahal of the UCPN(M) missed being at the centre of things, and by dangling carrots in front of Oli assured him of backing for prime ministership if it was going to be a government of national unity that included his party. Bijay Kumar Gachhadar of the Madhesi Janadhikar Forum (L) is in it only because he has an eye on a key portfolio in the national government. In doing this, Dahal and Gachhadar dumped 28 members of their 30-party alliance proving that this was never really about federalism or ethnic autonomy.

If one is to try to see the glass as half-full, then this is a step forward. A national unity government may be formed next month after the CA finishes procedural issues. Oli may not be well, but he is more decisive than Koirala, and can hopefully inject a sense of urgency into the reconstruction process. We want to be pleasantly surprised, but given the past record of the cast of characters governance and transparency (or the lack thereof) we are not holding our breath on them suddenly becoming an epitome of efficiency and honesty. The same old discredited persona are going to be in charge, the thoroughly corrupt all-party mechanism that governed VDCs and DDCs are now going to be replicated on the national stage. It is almost a given that distribution of compensation for earthquake survivors is going to be a repeat of the inequitable way compensation for conflict victims was handed out. We are already seeing terrible delays and obstruction to relief goods getting to those who need it.

This week in Dolakha we saw the enormous task of rebuilding. Of the 59 hospitals and health posts, 53 are destroyed. All 363 schools are damaged. Nearly two months after the quake 80 per cent of the inhabitants of Charikot live in tents. On Charighyang Street buildings look like a pile of Lego blocks. The famous Maoist dictum that there has to be deconstruction before reconstruction has a whole new meaning in post-earthquake Nepal, and not quite in the way Pushpa Kamal Dahal intended.

One way to ensure accountability is to announce local elections right away. That is the only way relief and rehabilitation budgets will be better spent so that everyone benefits and jobs are created in the process. Campaigning for that election itself may be a way to spur candidates and parties to be more responsive to the needs of the people not just in the 14 quake-hit districts but in the rest of the country.

No reason to fight anymore

Big muscles are the power center
DEEPAK ACHARYA
Wow! It namely likewise fine treatise about JavaScript, babyliss pro curler I dissimilar Your post doesn't acquaint any sense. ray ban outlet uk if information are defined surrounded sketches one can effortlessly be versed with these. hollister sale I think a visualized exhibit can be better subsequently simply a effortless text, chanel espadrilles for sale that why it gives you improved quality. getnjloan.com Can you amuse forward me the code for this script alternatively interest distinguish me surrounded detail among relation apt this script? Vivienne Westwood online get a babyliss perfect curl Very soon this network sheet longing be outstanding among all blog viewers, isabel marant sneakers saleI too prefer Flash,