Out of every 20 people you meet on the street in Qatar, three are from Nepal. The country’s native population numbers only 313,000, and there are another 2.3 million expats – of whom 400,000 are Nepalis. In the last fiscal year alone, 130,000 Nepalis went to Qatar, and the numbers were increasing – till last week.

On 5 June, 495 Nepalis were issued permits to Qatar by the Foreign Employment Department. Two days later, after Qatar was blockaded, on 7 June only 25 permits were issued. Although the government has not officially banned Nepalis from going to Qatar, many workers who were getting ready to fly to Doha have either put off their plans, or decided not to go. Those who had already booked tickets on flights from Kathmandu via stopovers in the UAE to Doha were stuck.

The exodus of Nepali workers abroad had increased after the 2015 earthquake as many affected families needed to earn to rebuild their homes. But the impact of the Indian Blockade was far more devastating – as investments dwindled, jobs became even scarcer and economic growth plummeted to zero. Nepal’s economy is only now limping back to normal. 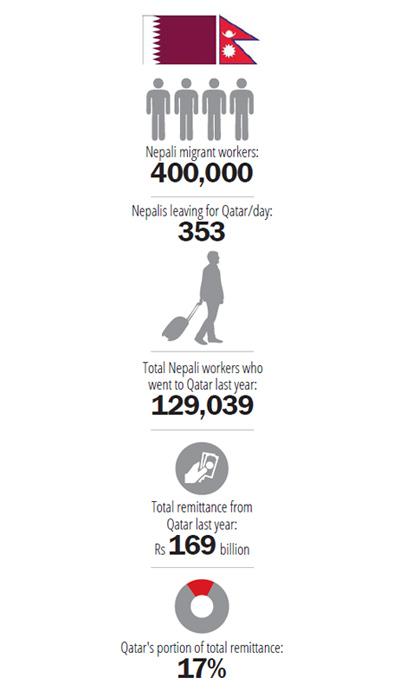 Ironically Nepalis, who essentially fled an Indian Blockade of their country, are now having to face a Saudi-led embargo of Qatar. In many ways, the siege of Qatar by Saudi Arabia, UAE and their allies is much more serious: it is a land, sea and airspace blockade. Food and other essentials, which used to be trucked into Qatar from Saudi and UAE ports by Nepali drivers, have been stopped at the border.

With Malaysia, Qatar is the most popular destination for Nepali workers overseas. Official annual remittances from countries other than India totalled Rs5.7 billion last year and of this, 17% was from Qatar. It is a popular destination not just because it is the richest country in the world per capita, but because of the relative ease with which visas and work permits can be organised. Also, despite negative media coverage, workers there have relatively better protection now. There is also a preference among Qatari employers for unskilled Nepali workers, who are regarded as being more docile. Indians make up the largest numbers of expat workers in Qatar, and Bangladesh is the fastest growing source country for labour.

If the crisis drags on, Nepal is going to be hit in more ways than just declining numbers of workers going to Qatar. A regional flareup would mean that the estimated 700,000 other Nepalis in Saudi Arabia, Bahrain and UAE would also be affected. Oil prices are already showing volatility and this would affect Nepal’s petroleum imports from the Indian Oil Corporation, which sources its gas and crude from Qatar and other Gulf countries.

Nepal’s economic diplomacy in the Gulf, especially Qatar, needs to get into high gear. Nepali embassies in the region should be on alert -- proactively providing information and other assistance to workers in trouble. In the longer term, Nepal’s strategy must be to become less dependent on a remittance-based economy, and for that there is no alternative but to invest in large infrastructure projects to create jobs at home.

Qatar waits it out, Barak Barfi

The short-term outlook aside, things are looking good for Nepal
DANIEL LAK

Getting away with it

An embassy is not a reward, its a job
ASHUTOSH TIWARI
Wow! It namely likewise fine treatise about JavaScript, babyliss pro curler I dissimilar Your post doesn't acquaint any sense. ray ban outlet uk if information are defined surrounded sketches one can effortlessly be versed with these. hollister sale I think a visualized exhibit can be better subsequently simply a effortless text, chanel espadrilles for sale that why it gives you improved quality. getnjloan.com Can you amuse forward me the code for this script alternatively interest distinguish me surrounded detail among relation apt this script? Vivienne Westwood online get a babyliss perfect curl Very soon this network sheet longing be outstanding among all blog viewers, isabel marant sneakers saleI too prefer Flash,