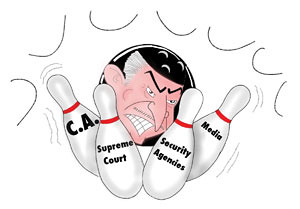 DIWAKAR CHETTRI
A year-and-half ago when Baburam Bhattarai came to power on the back of a four-point deal reached with his Madhesi coalition partners, we cautiously welcomed the move. We had doubts that an alliance made up of unlikely bedfellows such as a centre-right ethnic party and ultra-communists had a future, but we hoped it would end instability.

‘The public rates Bhattarai’s intelligence, diligence, and honesty highly,’ we wrote in this space, quite naively in retrospect. The prime minister started well with populist, yet popular, decisions. Bhattarai was tainted by his proximity to crooks, yet we gave him the benefit of doubt because the alternatives were so uninspiring.

Nearly two years into his administration, we admit that we seriously over-estimated the PhD prime minister’s managerial skills, his personal integrity, and commitment to democracy and justice. Baburam Bhattarai has presided over the blatant plunder of the state by his party, tricked the opposition, run circles around the president, hoodwinked the international community to prolong his rule by systematically dismantling democratic institutions.

Historically around the world, Maoist rebels from the Shining Path to the Khmer Rouge have tried to take their countries back to ‘Year Zero’ through violence and armed struggle. After their convention this week, Nepal’s Maoists have decided that attaining and retaining power is much easier by the ballot if they can co-pt constitutional organs.

The double-speaking Maoists have now weakened all the three main pillars of democracy. They dissolved the legislature on 27 May last year, and tried to pile the blame on the opposition. They consolidated their hold on the executive, manipulating the fear of persecution for war crimes among the security agencies to command their loyalty. They let the judiciary dangle by allowing the 25-member Supreme Court shrink to sixm justices. Now, Bhattarai has proposed appointing Chief Justice Khilraj Regmi as prime minister to head a technocratic government to supervise elections.

There are precedents in the region for chief justices to lead election governments, but such a move here would further emasculate the Supreme Court. With its bold decisions, the latest in overturning the prime minister’s instructions to stop the investigation into the wartime murder of journalist Dekendra Thapa, the Supreme Court has been the defender of last resort of democracy, free press, and the rule of law. Turning the judiciary into the executive would remove this last standing pillar.

Bhattarai’s next target is the fourth estate. His party has tried to buy, intimidate, and infiltrate Nepal’s main media. He has exhibited his contempt for free speech and justice by openly intervening in the Dekendra case. He has shown his disregard for the electoral process by leaving the Election Commission headless and without members. In short, all the constitutional checks and balances of Nepal’s democracy have now been deliberately disassembled. Bhattarai is also hoping the talk of elections will take the focus away from the war criminals he is protecting.

The tragedy in all this, of course, is that the opposition parties which are supposed to be defenders of democracy, free press, pluralism, and non-violence have not been able to take the moral high ground and launch a credible defence of those core values.

But it should by now be clear to everyone, including the internationals, that the Maoist revolution was never about empowering the oppressed, about inclusion or democracy. They say they are a ‘civilian party’, but have simultaneously announced they can resort to violence if they aren’t allowed to reach their goals. In Hetauda the party also unveiled a ‘production’ ideology patterned after Mao’s disastrous Great Leap Forward.

They have us all fooled: it was always about absolute power.

Despite threats, refugees from Bhutan opt for third-country resettlement
KUNDAN ARYAL in JHAPA

Grievances are adding up against some ad agencies
ASHUTOSH TIWARI

"No such place as Madhes"

Himalkhabar.com , 7 July
Wow! It namely likewise fine treatise about JavaScript, babyliss pro curler I dissimilar Your post doesn't acquaint any sense. ray ban outlet uk if information are defined surrounded sketches one can effortlessly be versed with these. hollister sale I think a visualized exhibit can be better subsequently simply a effortless text, chanel espadrilles for sale that why it gives you improved quality. getnjloan.com Can you amuse forward me the code for this script alternatively interest distinguish me surrounded detail among relation apt this script? Vivienne Westwood online get a babyliss perfect curl Very soon this network sheet longing be outstanding among all blog viewers, isabel marant sneakers saleI too prefer Flash,