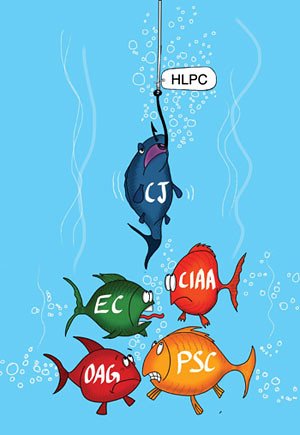 DIWAKAR CHETTRI
The ultimate test for the Chairman of the Interim Election Council of Ministers Khil Raj Regmi and his new 11-member cabinet of ex-bureaucrats will be whether or not they can hold elections in November or whenever.
In his first week on the job Regmi is systematically ticking off his main agenda items in order of priority:


Form a cabinet of technocrats

Get disgruntled small parties to row in the same direction

Given the mess that he inherited, Regmi has an unenviable task in the months ahead. There is a fuel and electricity crisis, the lawlessness on the streets borders on anarchy, fringe parties are on a warpath, and he has to keep the Big Four at arms length if he is to be successful.

And that last part is the main threat to Regmi’s objectivity and effectivity. The signs are not good. It is not clear if the four-party High Level Political Committee that is currently headed by Maoist Chairman Pushpa Kamal Dahal is supposed to recommend appointments and actions to the non-political cabinet or issue directives.

From pronouncements made by senior Maoist leaders it is clear the parties do not want to just sit on the sidelines and twiddle their thumbs. Former Prime Minister Baburam Bhattarai actually said just after he stepped down that the ‘keys and lock’ of government were still with the political parties.

The Committee is further proof that this country has become a four-party dictatorship. What of the other smaller parties? Some token consultations have been made, but the 22 are as disgruntled as ever. The nominee of the Maoist and Madhesi parties for the new head of the CIAA would have been laughable if it wasn’t so bizarre. The only good thing anyone has to say about Lok Man Singh Karki is that he is ‘decisive’. He is to head the same anti-corruption agency that once labelled him ‘unfit for any government position’.

It is easy to see that the Maoists and Madhesis are protecting their backs from any moves by the CIAA to investigate the massive plunder by members of the coalition cabinet during their one-and-half year tenure. The skeletons are rattling and this is a crude attempt to empty the closet.

Regmi’s first week in office was marred by physical attacks on the manager of Radisson Hotel and the vandalising of Ncell, one of Nepal’s biggest foreign investors. Both seem to be extortion related and perpetrated by militant unions, who have intensified extortion sprees of businesses after elections looked imminent. How is the technocrat government going to control this?

But the first test of the Regmi regime will be whether it can stand up to the Big Four and agree to Karki’s CIAA candidacy. If Karki is indeed appointed, then it will confirm our worst suspicions that the cabinet is a rubber stamp body and its members are robots.

On the other hand, Regmi and his band of merry ex-bureaucrats have a historic opportunity to show that this time it is different. In Pakistan in 1993 a technocrat government led by former World Bank/IMF executive, Moeen Qureshi is often touted as the cleanest and most efficient government that country ever had – and it wasn’t even elected.

After the Election Commission and election dates are sorted out, the new cabinet has to get down to rescuing the economy from freefall. Nepal’s macro-economic parameters which were always healthy no matter if the politics was in tatters, is now showing signs of serious prolapse because of extended political abuse.

It is outside the purview of the interim government to take big decisions and address long-term crises, but the economy needs emergency care. And even if Regmi can just do a Qureshi, a lot of Nepalis will thank him for it.

How Maina was killed

Jana Aastha, 30 August
Wow! It namely likewise fine treatise about JavaScript, babyliss pro curler I dissimilar Your post doesn't acquaint any sense. ray ban outlet uk if information are defined surrounded sketches one can effortlessly be versed with these. hollister sale I think a visualized exhibit can be better subsequently simply a effortless text, chanel espadrilles for sale that why it gives you improved quality. getnjloan.com Can you amuse forward me the code for this script alternatively interest distinguish me surrounded detail among relation apt this script? Vivienne Westwood online get a babyliss perfect curl Very soon this network sheet longing be outstanding among all blog viewers, isabel marant sneakers saleI too prefer Flash,