India expects us to wave the white flag. Our leaders are waving the national flag. Neither is a way out. 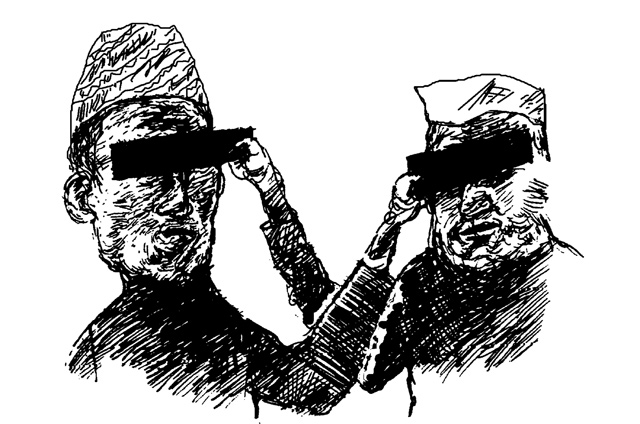 Sooner or later (the sooner, the better) this blockade will come to an end. It must. It is aberrant, illegal, destabilising and detrimental to the longterm national interests of both India and Nepal.

Once the border is open again, we will have to start counting the cost. Nepal will have borne momentous losses in monetary terms – the economic damage to the country of the two-month long blockade already far exceeds the impact of the earthquake that affected 12 districts in April. Nepal’s already-shaky economy will take years to recover from the cumulative destruction -- which is far greater than the sum of its parts -- of the earthquake and the blockade. Nepal’s growth forecasts for the coming years will have to be revised downwards. Development has suffered a tremendous setback.

Of more immediate humanitarian concern is the effect that the blockade is having on the delivery of relief and construction material to nearly 2 million survivors of the earthquake so they can rebuild before a harsh Himalayan winter. This is an unfolding and ongoing disaster, and unlike the earthquake is completely human induced.

Yet, parachutist journalists from the international media who were so quick to descend on Kathmandu in April are now nowhere to be seen. This time, there aren’t any visuals of pancaked temples, of bodies crushed under concrete beams, of babies rescued alive after 24 hours of being buried under the rubble. A blockade, what led to it, and what it is doing to us, is too complicated to explain to the outside world. Food scarcity, the shortage of medicines and the lack of fuel is now hurting Nepalis all over Nepal but it does not fit the definition of 'newsworthy'. So the stories take the predictable on-the-one-hand-this-and-the-other-hand-that approach.

By now, only the propagandists and the most gullible believe that the obstructions at the India-Nepal border are a result of the Madhesi agitation. India’s border SSB and officials at the Indian Oil Corporation have repeatedly let the cat out of the bag: “orders from above” not to let trucks and petroleum tankers to pass through. What is surprising is that the Indians expect us to believe it. Or maybe they don’t really care what we believe which, if true, is even more baffling. The blockade will have an impact on Nepal’s stability long into the future by irreversibly polarising hills-plains relations, which in turn will have a bearing on Nepali-speaking India. It will make it doubly difficult to sell any joint river basin project to the Nepali public, and further alienate the Madhesis within Nepal.

The international community is watching, aghast. Doesn’t New Delhi realise the impact of what it is doing, it asks. Even Nepalis who have always been sympathetic towards India are bewildered. A long-term Indian resident of Kathmandu said to us the other day: “I have never been as ashamed to be an Indian.”

People here have long stopped buying the argument that this is about the constitution or the Madhesi cause, it is about India out to teach Nepal a lesson that we will not forget any time soon. It may work, or it may not. Either way, it will destroy what trust there has been between the two countries. We can merely look back at Sri Lanka and hope there is some lingering memory of the price India and its then-leader paid for playing dirty there. If it is true that this is all about Bihar state elections, then it is even more bizarre.

We will not even try to enumerate the various international treaties that India has violated with the blockade. Enough just to say that it breaches one code: the one of decency and good neighbourliness. Nepal passed a new constitution adhering to principles of democracy, trying to balance the demands of all interest groups while trying to protect national unity. Despite serious flaws, it is a document that for the first time takes a significant break from our feudal past. The points of disagreement -- over demarcation of provinces, etc -- can easily be rectified through amendments and the main parties in Kathmandu have publicly pledged to do so.

Nepal’s curse is that we have rarely had the pragmatic statesmen we deserved, and never any leaders who truly lead by example. We either had populist chieftains, greedy demagogues or foolish adventurists. The current crop of leaders in the coalition is to blame for mishandling the constitution process and misreading Delhi. They broke it, so they must fix it.

India expects us to wave the white flag. Our leaders are waving the national flag. Neither is a way out.

Drishti, 14 June
Wow! It namely likewise fine treatise about JavaScript, babyliss pro curler I dissimilar Your post doesn't acquaint any sense. ray ban outlet uk if information are defined surrounded sketches one can effortlessly be versed with these. hollister sale I think a visualized exhibit can be better subsequently simply a effortless text, chanel espadrilles for sale that why it gives you improved quality. getnjloan.com Can you amuse forward me the code for this script alternatively interest distinguish me surrounded detail among relation apt this script? Vivienne Westwood online get a babyliss perfect curl Very soon this network sheet longing be outstanding among all blog viewers, isabel marant sneakers saleI too prefer Flash,