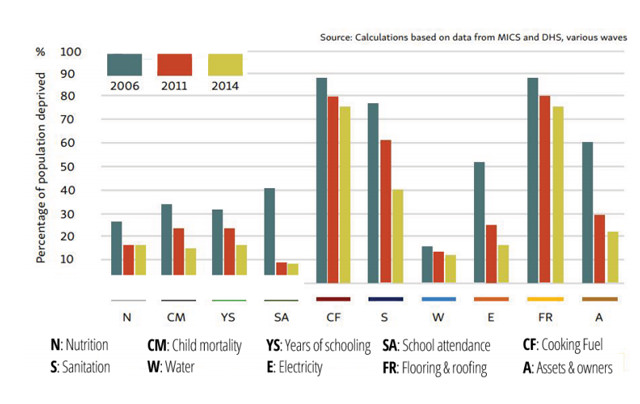 The UML swept the local elections in mid-2017, and as a member of the Left Alliance went on to win a near-landslide in parliamentary and provincial elections last month. Voters showed they were attracted by the Alliance’s catchy slogan of ‘prosperity with stability’.

We can’t comment about stability because the dramatis personae of Nepal’s never-ending transition are the same. In the month after elections, they have shown no real change in their modus operandi.

But we can hold out some hope on the prosperity front. Well, maybe not wealth creation as such, but certainly in reducing overall poverty. As the result of the latest wave of the Multidimensional Poverty Index (MPI) survey conducted by the National Planning Commission in 2014 shows, Nepal has seen the incidence and intensity of poverty fall by more than half – from 59.3% in 2006 to 28.6% in 2014.

The figure of 28.6% is slightly higher than the national rate for income poverty of 23.8%. The reason for this is that MPI takes into account a diverse range of parameters to measure deprivation: it goes beyond just income figures to factor in nutrition, education, child and maternal mortality, household energy use, along with roofing and flooring of a house, sanitation and water supply.

What is surprising is not that poverty has decreased dramatically over the last decade, but that it has decreased despite chronic instability and poor governance under successive regimes since the end of the conflict in 2006. One of the reasons is the $6.1 billion that Nepal receives annually from overseas workers, although the figure is probably much higher because it is only an estimate based on official bank-to-bank transfers and does not include money the 2.5 million Nepalis working in India bring home.

Yet, as the graph above shows, we should not be uncorking the sparkling wine just yet. The 28.6% figure is a national average: a breakdown by newly-formed federal provinces shows that although Province 3 (which includes Kathmandu Valley) has a poverty headcount of about 12.2%, Province 6 and 2 have MPI poverty rates of 51% and 48%.

Nothing surprising there: we have always known that the mid-western mountains and the eastern Tarai have suffered from topographical challenges and state neglect. The survey results offer an explanation about which dimension of poverty in each of the provinces contributes to deprivation in that part of Nepal. For instance, Province 2 has the highest number of poor, but is not monetarily as poor as some of the others. The plains region is kept back by housing, energy use, nutrition criteria and chronic floods.

There are entrenched pockets of deprivation in Nepal, and the largest contributors to national poverty overall is the high dropout rate and nutrition – factors underlined by targets that Nepal did not meet for the Millennium Development Goals.

Measuring poverty is one thing, alleviating it is another. Nepal’s poverty rate has gone down in the last decade despite poor governance. The new government in the new year has a chance to ensure stability so we can augment accountability, improve governance, and address the structural poverty that stems from discrimination and neglect.

The flood of migration, Shreejana Shrestha