It is in India’s strategic interest to ensure equilibrium and stability in Nepal, but the blockade has undermined that. 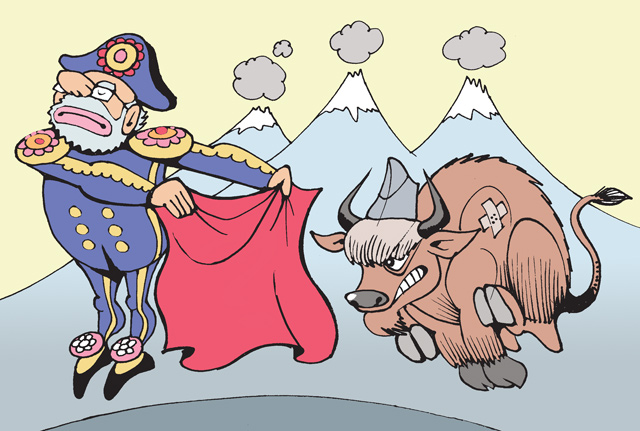 Nepal’s constitution was finally promulgated on 20 September by an overwhelming majority in a freely elected Constituent Assembly with a fair and proportionate representation of most ethnic, caste and gender groups. Less than 10 per cent voted against or boycotted the promulgation. Even rejectionists and die-hard critics of the constitution will admit that it was the product of a fully free and fair democratic exercise.

Which is why it is surprising that the world’s largest democracy and the United Nations have been so grudging in accepting this as a document that, while flawed, ended years of deadlock and can be the basis of an inclusive and durable constitution.

To express its misgivings about the constitution, India has obstructed the flow of food, fuel and goods entering Nepal, hoping that the hardships the Nepali people are forced to suffer will compel Nepal’s rulers to buckle.

What is hard to understand is why all the needless lies and deception? How does a thinly veiled border blockade help India’s national interest anyway? The move is foolish on so many levels that even sections of the international community, which had in recent years sub-contracted their Nepal policy to New Delhi, are aghast.

From what we can piece together, the Indian foreign policy establishment was understandably unhappy with the post-earthquake 16-point agreement between the four parties on 8 June to fast track the constitution. They made these misgivings clear to Nepali leaders visiting New Delhi, including Pushpa Kamal Dahal and Sher Bahadur Deuba who had assured them that Madhesi concerns would be taken into account. After all, Bijay Gachhadar’s MJF-D was on board at the time.

But when it became apparent that the federal delineation was not to his liking, Gachhadar was leaned upon to quit the alliance, and violent protests rocked the western and the eastern Tarai. The Indian Ambassador did some frantic lobbying to try to convince the NC, UML and UCPN(M) to postpone the constitution by four days to bring the Madhesi parties on board. The government waited out the weekend but went ahead with the process. Less than 48 hours before the promulgation, Foreign Secretary S Jaishanker was dispatched to Kathmandu for some blunt talk. The Big Three didn’t like the body language, and bulldozed the constitution through. That is where they made a serious miscalculation: they never thought India would go so far as to seal the border in retaliation.

Whatever reservations India had about the constitution, however much the new constitution had failed to address the concerns of Nepal’s excluded, it was a start. Critics have latched on to deficiencies that can be corrected in the future through future amendments, and have ignored many of the positive points in the document. The constitution thus became a lightning rod for everyone with a grievance, including politicians who lost the 2013 elections and needed constitutional guarantees of representation so they’d never again suffer such defeat.

It is difficult to understand how India stands to benefit from such a crude attempt to be mean and show who’s boss. Even critics within India have ridiculed it as a major mishandling of foreign policy, and there are indications in New Delhi of rifts within the establishment, the Hindu right, among intelligence agencies, and the bureaucracy, about the blockade.

In Nepal, it has undone the dramatic breakthrough in bilateral relations achieved by Prime Minister Narendra Modi's visit here last year. Most Nepalis had forgotten two previous Indian blockades, but this past week has spawned a whole new generation of anti-Indian Nepalis. This cannot benefit India, or Nepal, in the long-term.

Nepalis from the plains have always suffered discrimination from the hill establishment, they have not been treated with respect, and their loyalty to the Nepali state is questioned every step of the way. This Indian intervention, however camouflaged, will now make it even more difficult for them.

New Delhi and Kathmandu both need to de-escalate. In the first sitting of parliament on Friday, Tarai MPs from the Big Three could push amendments to the constitution to address some of the concerns of the Madhesi parties and India, including the delineation of constituencies based on population broadly based on districts, re-insert ‘proportion’ and ‘Tarai Madhes’ in the wording, etc.

The new Prime Minister and his government have their work cut out for them. They have to rush earthquake relief delayed by politics and the blockade, they have to heal the serious rifts that have emerged between the hills and the plains, and they have to steer the country on a path to rapid economic growth.

This is still possible to do, and it would be in India’s own strategic interest to help Nepal attain equilibrium and stability.

Ghatana Ra Bichar, 18 October
Wow! It namely likewise fine treatise about JavaScript, babyliss pro curler I dissimilar Your post doesn't acquaint any sense. ray ban outlet uk if information are defined surrounded sketches one can effortlessly be versed with these. hollister sale I think a visualized exhibit can be better subsequently simply a effortless text, chanel espadrilles for sale that why it gives you improved quality. getnjloan.com Can you amuse forward me the code for this script alternatively interest distinguish me surrounded detail among relation apt this script? Vivienne Westwood online get a babyliss perfect curl Very soon this network sheet longing be outstanding among all blog viewers, isabel marant sneakers saleI too prefer Flash,