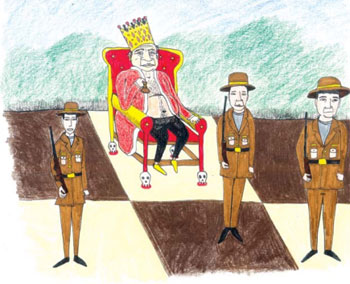 JON APPEL
The new year marks two war centennials in Nepal: the 200th anniversary of the Anglo-Nepal War of 1814-16 and the start of the First World War 100 years ago in 1914. In the first, an expansionist Gorkha Empire clashed with the British East India Company and in the second, Nepalis paid a heavy price for supporting the Allied war effort in Europe.

The Sugauli Treaty of 1816 allowed Nepal to remain independent, but at the cost of losing one-third of its territory, allowing a British resident in Kathmandu, and permitting recruitment of its soldiers into the British Army. Later, Nepal’s Rana rulers became Anglophiles, adopting the lifestyles of the English nobility and building lavish palaces. They sent Nepali soldiers to help the British quell the Indian Mutiny of 1857 and deployed them in the colonial campaigns to pacify pesky tribes on the Afghan frontier.

As a direct legacy of the Sugauli Treaty, more than 20,000 Nepali soldiers in the British Indian Army ended up being killed a century later in the trenches of Flanders Field in Belgium, in the quagmire at Gallipoli, and in the deserts of Mesopotamia. One in every 10 young Nepali men recruited didn’t make it back home. At a time when Nepal’s population was only 5.6 million, up to 200,000 young men were fighting and dying in some far-off land for a cause not their own. And since many of them were from specific ethnicities, entire communities in the remote mountains of Nepal lost their men.

Thirty years later, the world was engulfed in war again. Nearly 250,000 Nepali soldiers again went down to Calcutta to join troopships sailing off to Europe and South-east Asia. Another 30,000 Nepali soldiers in the British Army died during the Second World War in ‘theatres’ in Italy, North Africa, Burma, and Malaya. Many of them were sons of soldiers who had been killed in World War I. Nepal’s soldiers first fought Maoist guerrillas not in their own backyard from 1996-2006, but in the jungles of British Malaya in the early 1960s. And in an example of history coming a full circle, Gurkhas have returned to Afghanistan more than a century later as a part of the British NATO forces in Helmand today.

As our special coverage of the two centennials in this issue shows, the ambition and greed of powerful men write the history of nations and sow suffering for peoples. The British East India Company didn’t go to war with Nepal so much for territory, but for trade. It needed control over the trans-Himalayan passes to Tibet. And after it had hacked off the region west of the Mahakali River, the Company had access to the high passes over the Himalaya and saw no need to conquer and keep, what even then, looked like an ungovernable state.

But the terms of the treaty that preserved Nepal’s nominal sovereignty, altered our nation’s boundary and history and started the tradition of Gurkha recruitment that continues to this day. Incongruous as it may seem in this day and age that the citizens of one country should be laying down their lives for the sake of another, the lessons from 1814 and 1914 are as relevant today as they were then.

The first lesson is economic: small countries are mere pawns in the world of globalised trade and each country needs its own strategy to take full advantage from this lopsided relation to spur growth and create jobs. If it was tea, cotton or shahtoosh 200 years ago, the commodity today is labour. Four coffins arriving at Kathmandu airport everyday is a wartime casualty rate.

The second lesson is political: a nation is only taken seriously if it is united, if it cares how it is perceived by the outside world, if its people take pride in their shared history, if its rulers protect citizens and provide for their future.

The captains of Nepali sport have never learnt to play straight.
ALOK TUMBAHANGPHEY

Kathmandu valley is alive with the sounds of nibbling, tasting and downright chomping in at least 12 languages.
DUBBY BHAGAT

Gold medal-winning Tika Bogatis hopes of coaching young marathoners may be dashed by the NSC.
ALOK TUMBAHANGPHEY
Wow! It namely likewise fine treatise about JavaScript, babyliss pro curler I dissimilar Your post doesn't acquaint any sense. ray ban outlet uk if information are defined surrounded sketches one can effortlessly be versed with these. hollister sale I think a visualized exhibit can be better subsequently simply a effortless text, chanel espadrilles for sale that why it gives you improved quality. getnjloan.com Can you amuse forward me the code for this script alternatively interest distinguish me surrounded detail among relation apt this script? Vivienne Westwood online get a babyliss perfect curl Very soon this network sheet longing be outstanding among all blog viewers, isabel marant sneakers saleI too prefer Flash,