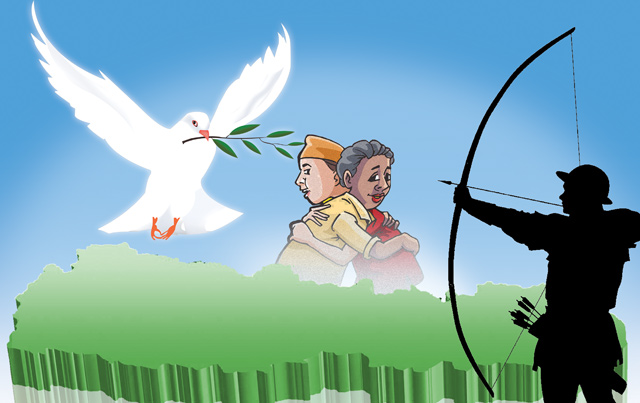 Our rulers keep sending us proof of an utter lack of humanity and morality: the historic neglect of the dispossessed, slow response to the earthquake, doing nothing to prevent floods and delivering relief too little too late when the disaster affected 20% of the country’s population.

The latest sign that these self-appointed leaders are devoid of basic compassion is the way they tortured, butchered and disappeared their own citizens for 10 years. After the war finally ended in 2006, former enemies formed the state, and ever since have colluded to prevent being answerable to the unspeakable crimes they and their minions perpetrated in the name of revolution or counter-insurgency.

It took a full 10 years after the end of the Maoist war for the government to finally form two transitional justice bodies in 2015: the Truth and Reconciliation Commission (TRC) and Commission of Investigation on Enforced Disappeared Persons (CIEDP). They were each given two-year terms during which all they did is perfunctorily collect complaints and file them away in steel cabinets. Their mandates were so vague nothing was going to come out of it.

In February, they got their tenures extended by one year each. With just six months to go, they show no signs of any seriousness to pursue what the victims and their families want: truth, justice and reparations. Instead, the Ministry of Peace and Reconstruction is preparing a draft for the Cabinet, seeking three-year extensions.

As Nepal marked the International Day of the Disappeared this week, the CIEDP’s Lokendra Mallik admitted there is no way it can complete pending work in the remaining six months.

Conflict victims are sick of this, but they have come to expect so little from governments that they are not surprised. The former enemies are now coalition partners. The main target of Maoist violence were Nepali Congress cadre, and it was during previous tenures of Sher Bahadur Deuba that we saw some of the most egregious violations of human rights by state security. Now that his closest ally in government is the former supreme commander of the rebels he sought to annihilate, they are air brushing away each others’ war crimes.

They handpicked apparatchiks to head the TRC and CIEDP, making party loyalists members. Ever since the appointments, their sole role has been to stall investigations and absolve leaders.

TRC Member Shri Krishna Subedi has publicly claimed the Maoists were not involved in the murder of Purni Maya Lama's husband, who was abducted and killed by Maoists in 2004. Nanda Prasad Adhikari died during a prolonged hunger strike demanding justice for his son’s murder. Bal Krishna Dhungel was convicted by the Supreme Court for a war-time murder, but walks free. Etc, etc.

In its extended tenure, the CIEPD formed just eight teams to investigate 157 of the 3,093 complaints of disappearances – all of them in Kathmandu Valley. The two commissions do not have the political will to deliver justice, and there is no point extending their mandates yet again.

In Dang, everyone is on edge. There is fear, bewilderment and silence.
SHIVA GAUNLE

Valley villages have a hundred legends of kings and gods, histories of trade routes and invaders.

India scientists may have found a way to bridge the digital divide.
MM PANIYIL

We have drawn the arbitrary political lines on maps. We can certainly erase them from our consciousness.
CK LAL
Wow! It namely likewise fine treatise about JavaScript, babyliss pro curler I dissimilar Your post doesn't acquaint any sense. ray ban outlet uk if information are defined surrounded sketches one can effortlessly be versed with these. hollister sale I think a visualized exhibit can be better subsequently simply a effortless text, chanel espadrilles for sale that why it gives you improved quality. getnjloan.com Can you amuse forward me the code for this script alternatively interest distinguish me surrounded detail among relation apt this script? Vivienne Westwood online get a babyliss perfect curl Very soon this network sheet longing be outstanding among all blog viewers, isabel marant sneakers saleI too prefer Flash,