The tale of two Commissions

Thousands of conflict era survivors are still in search of justice. 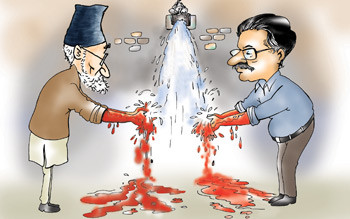 Seven years after the conflict ended, the government on Wednesday finally tabled a bill in parliament to form two commissions to look into wartime excesses. In 2006, the seven political parties and the Maoists had agreed to form a Truth and Reconciliation Commission (TRC) and a Commission on Disappearances (CD) within six months of the promulgation of Interim Constitution.

The proposal has been mired in controversy ever since, through six changes in governments. The delay was not because the Maoists and their former enemies disagree on its mandate, but because they agree. Neither side lost the war, and since politicians of all hues could have blood in their hands, they want to wash it off.

The bill was opposed by both former enemies in the name of protecting the peace process. Clauses in the draft bill include a general amnesty for criminals, which would go against the Supreme Court decision and against international law.

Thousands of conflict era survivors are still in search of justice. One such is the family of journalist Dekendra Thapa who was buried alive in Dailekh after being tortured by the Maoists in 2005. Last year, after one of the perpetrators admitted he had helped bury Thapa, Prime Minister Baburam Bhattarai and Attorney General Mukti Narayan Pradhan ordered the district police office and attorney to stop any further investigation into the First Information Report. The Maoists have maintained all along that all conflict-era cases should be handled by the new Commissions and not through the regular courts.

But the Supreme Court, addressing a writ petition against Bhattarai and Pradhan, ruled that conflict-era crimes could be investigated and prosecuted under regular criminal procedure in the absence of transitional justice mechanisms. Sources involved in drafting the TRC and CD bills say most of the provisions are based on court directives, but senior Maoist leaders have been most vocal in objecting to them arguing that it goes against the Comprehensive Peace Accord and the Interim Constitution.

The main role of the Commissions is to address transitional justice and hear the voice of the survivors. There are thousands of cases where the FIR on conflict-era cases has been ignored by police or the district attorney. And even when cases are filed, the government has been reluctant to punish criminals. Some politicians convicted and jailed by the courts are still walking free.

In cases perpetrated by both sides, like those of Arjun Lama and Maina Sunwar of Kavre, Ujjan Kumar Shrestha of Okhaldhunga, Krishna Prasad Adhikari of Gorkha, there has been no justice served. Now, it is even less likely the guilty will be caught.

In the last seven years of transition all six governments have tried to withdraw cases against their cadre and prevent the commissions being set up. The Ministry of Law has more than 2,000 conflict-era cases still pending but which successive governments tried to dismiss.

Nothing, but the truth Ram Kumar Bhandari

Nepals domestic airlines are lining up fortake-off with a whole new array of aircraft, new routes and more frequency.
A NEPALI TIMES SURVEY
Wow! It namely likewise fine treatise about JavaScript, babyliss pro curler I dissimilar Your post doesn't acquaint any sense. ray ban outlet uk if information are defined surrounded sketches one can effortlessly be versed with these. hollister sale I think a visualized exhibit can be better subsequently simply a effortless text, chanel espadrilles for sale that why it gives you improved quality. getnjloan.com Can you amuse forward me the code for this script alternatively interest distinguish me surrounded detail among relation apt this script? Vivienne Westwood online get a babyliss perfect curl Very soon this network sheet longing be outstanding among all blog viewers, isabel marant sneakers saleI too prefer Flash,