The rise and fall of the world’s poorest nations 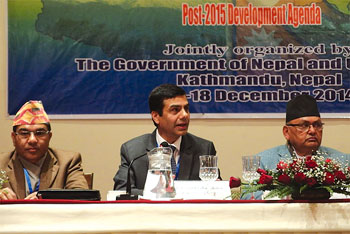 The world’s 48 Least Developed Countries (LDCs) – a special category of developing nations created by the General Assembly in 1971 but refused recognition by the World Bank – have long been described as the ‘poorest of the poor’ in need of special international assistance for their economic survival.

But only three – Botswana, Cape Verde and the Maldives – have so far ‘graduated’ from being classified as an LDC to a developing nation, based primarily on their improved social and economic performance. Nepal has given itself the target of attaining that status by 2022.

At a UN-sponsored ministerial meeting of Asia-Pacific nations in Kathmandu last month, four more LDCs (namely Bangladesh, Bhutan, Cambodia and Laos) were singled out as countries on the ‘threshold of graduation’ based on their recent economic and social indicators. And as economies improve, some predict that at least six more countries (Tuvalu, Vanuatu, Kiribati, Samoa, Angola and Equatorial Guinea) are likely to be forced out of the ranks of LDCs, possibly by 2020 or beyond.

But this outlook may be premature due to several factors, including the impact of the global economic recession, the long-term effects of the decline in oil prices, reduced purchasing power due to falling national currencies, and in the case of Africa, the spread of Ebola.

A meeting in Istanbul in 2011 set an objective of graduating 50 per cent of LDCs out of the group by the year 2020. “But this mechanical setting of a target for graduation is impractical and has the potential of undesirable tension for development cooperation at national and global levels,” said Anwarul Karim Chowdhury, the first UN Under-Secretary-General and High Representative for LDCs.

The foremost objective of graduation should be to bring LDCs out of poverty and their structural handicaps, he noted. But given the current distressing situation in most of the LDCs in both areas, it would be unwise for either the LDCs or their development partners to go towards realising this target.

LDCs represent the poorest and weakest members of the international community, comprising more than 880 million people and accounting for less than two per cent of global GDP. Fighting poverty in the LDCs is a key component to reach the UN’s landmark 2015 Millennium Development Goals.

LDCs currently benefit from a range of special support measures from bilateral donors and multilateral organisations, and special treatment under regional and multilateral trade agreements. The benefits that will be lost or reduced due to LDC graduation include trade preferences, official development assistance (ODA) including development financing and technical cooperation.

Arjun Karki, coordinator of LDC Watch (a network of NGOs) said the aim of the 2011 Istanbul Programme of Action was to enable at least 24 LDCs  to graduate by 2020, so the current proposals for graduation have not reached this level. Graduation is solely based on their income criterion (of Gross National Income per capita having exceeded at least twice the upper threshold of $1,190) while they fare low in the human assets and economic vulnerability criteria.

Gyan Chandra Acharya (center, pic) the current Under-Secretary-General and High Representative for LDCs, Landlocked Developing Countries and Small Island Developing States, told delegates at the ministerial meeting in Kathmandu: “The path towards graduation should not be an end in itself but should be viewed as a launching pad towards meaningful and transformative changes in the economic structures and the life conditions of people in graduated and graduating LDCs.” (IPS)

The mother of all floods

A catastrophic flood on the Kosi is not a question of if, but when.
Are we ready?
NAVIN SINGH KHADKA

The dogs of war

Rajdhani, 2 April
Wow! It namely likewise fine treatise about JavaScript, babyliss pro curler I dissimilar Your post doesn't acquaint any sense. ray ban outlet uk if information are defined surrounded sketches one can effortlessly be versed with these. hollister sale I think a visualized exhibit can be better subsequently simply a effortless text, chanel espadrilles for sale that why it gives you improved quality. getnjloan.com Can you amuse forward me the code for this script alternatively interest distinguish me surrounded detail among relation apt this script? Vivienne Westwood online get a babyliss perfect curl Very soon this network sheet longing be outstanding among all blog viewers, isabel marant sneakers saleI too prefer Flash,