Progress for many who lost homes in the earthquake is painfully slow, still slower for others 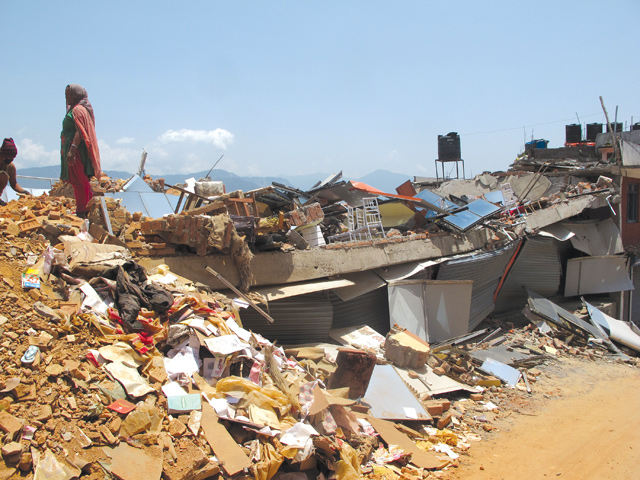 More than two years after the earthquakes of 2015, most people whose houses were heavily damaged or destroyed still haven’t started rebuilding. The figure is 50% or greater in all districts except for Gorkha (48%), Syangja (33%) and Solukhumbu, where an incredible 91% have begun the task, found early results of the fourth survey in a series led by The Asia Foundation.

Other results are equally shocking. For instance, 23% of people in the 11 earthquake-affected districts were still living in temporary shelters. In Sindhupalchok the figure was 84%. At the other end of the scale was Lamjung (1%).

Among people who had received the first tranche of the housing grant, 47% did not know the requirements for getting the second tranche. That included 61% of women and 60% of so called low-caste people.

There has been improvement. Sixty-two percent of people in the most-affected districts reported living in temporary shelters, compared to 71% in September 2016. The survey is part of the Independent Impacts and Recovery Monitoring Project carried out in April 2017 by Interdisciplinary Analysts for The Asia Foundation (TAF), with support from UK aid agency DfID and the Swiss Agency for Development and Cooperation.

“The shelter and housing situation is improving but there is still a long way to go and progress has been slower than that following many other disasters in the region,” says TAF’s conflict lead, Patrick Barron. “There are some areas where progress has been particularly slow.”

Marginalised groups are recovering more slowly. Across all districts, 44% of people with a low income (below Rs10,000 per month) are still in shelters, compared to 20% with a medium income (Rs10,000-19,999) and 10% with a high income (Rs20,000 or more). 46% of low-caste people whose house saw major damage are still in shelters compared to 32% of high-caste people who had the same housing damage, Barron said.

The TAF briefing note points out that the differences ‘are a product of differing abilities to recover rather than differing initial impacts from the earthquakes’.

In a recent article in this paper, Govind Raj Pokharel of the Nepal Reconstruction Authority (NRA) said work in the coming year would focus on ensuring that ‘deprived and marginalised groups, including single mothers, the elderly, people with disabilities, the extreme poor, and Dalits, are not left behind’.

But Pokharel downplayed expectations: ‘Our institutional capacities are weak, we lack skilled human resources and flexible financial mechanisms, and the country is in the midst of a political transition. Today the resource gap for physical rebuilding stands at $3.9 billion but if we can add financing, we can complete most reconstruction in the next three years.’

In its latest full report in May 2017 following the third survey in the series, TAF called for urgent action on shelter and housing.

As in the earlier three surveys (June 2015, Feb-March 2016 and Sept 2016) 4,854 people were interviewed, where possible the same ones. Full results of the survey will be released in September.

Rebuilding for all, Guest Editorial

Shopping till you are dropping

With Dasain and Tihar over and less than seven weeks to go for Christmas, Kathmandus trinket bazaars are gearing up again for the next holiday season.
HEMLATA RAI

Corruption rules. It determines what flies over our heads and what is driven on our roads.
ARTHA BEED

There are quite simply too many demands made on our limited time in this cyber-driven, obsessive web-based world we
live in. No time for reflection, contemplation, medication, vegetation or an afternoon nap.
DANIEL LAK
Wow! It namely likewise fine treatise about JavaScript, babyliss pro curler I dissimilar Your post doesn't acquaint any sense. ray ban outlet uk if information are defined surrounded sketches one can effortlessly be versed with these. hollister sale I think a visualized exhibit can be better subsequently simply a effortless text, chanel espadrilles for sale that why it gives you improved quality. getnjloan.com Can you amuse forward me the code for this script alternatively interest distinguish me surrounded detail among relation apt this script? Vivienne Westwood online get a babyliss perfect curl Very soon this network sheet longing be outstanding among all blog viewers, isabel marant sneakers saleI too prefer Flash,